Wise lessons about the pursuit of wealth

Sinnepoppen (1614) by Roemer Visscher (1547-1620), a merchant from Amsterdam, was probably the most popular emblem book written in the Dutch Golden Age. Simply put, emblem books are compositions of cryptic text (motti and subscriptios) and images (picturae). This literary genre was introduced in 1531 when the publisher of a volume of Latin epigrams by the Italian Alciato decided to illustrate his poems. The concept soon gained popularity among scholars and several editions of Alciato’s Emblematum liber were printed in Europe. It did not take long before new emblem books followed, which were not solely directed at scholars, but were also written more simply or in vernacular for a wider audience.

Emblem books on love were particularly popular in the Low Countries. They included provocative text and imagery that was intended to teach the reader in a playful manner about subjects such as love, heartbreak, marital fidelity and choice of partner. The practical impact of emblem books on love reached its height when Jacob Cats published Sinne- en minnebeelden in 1618. The emblem book Sinnepoppen by Visscher is not about love, however, conveying instead a moral lesson about money and profit.

Roemer Visscher, businessman and member of the cultural elite

In the first two decades of the 17th century, Visschers house on Geldersekade served as a meeting point for the cultural elite of Amsterdam. As successful businessman, he accumulated a fortune and was also well-read in Latin, Italian and French literature, affording him the opportunity to raise his famous daughters Anna and Maria Tesselschade with an appreciation of art. He was also the leading member of the In liefde bloeiende chamber of rhetoric.

Visschers strength proved to be short poems, including emblems. In Leiden in 1612, some of Visschers poems were printed without his knowledge. He responded to this with the emblem book Sinnepoppen in 1614. Published by the well-known publisher Willem Jansz. Blaeu of Amsterdam, the work included 183 emblems, divided into three sections or schocken in Dutch, which refers to the sixty emblems in each section of the book. The images are etches touched up using a burin, which were created by the illustrator and publisher Claes Jansz. Visscher, who – incidentally – was no relation to Roemer.

‘A short, sharp discourse’ that everyone can understand

Not too difficult, not too simple 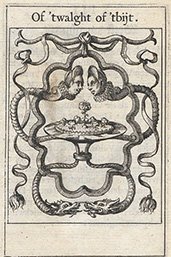 In a break with the tradition of the time, the prints in Sinnepoppen were not accompanied by verses, but by prose in conversational tone. The book displayed a range of typically Dutch objects, including ships, locks, skaters, mills and tulips, as well as many tools and instruments, such as a compass and a saw.  While a stand was taken against the pursuit of wealth and extravagance, the Dutch were complimented on their business sense and creativity.

Gap in the market 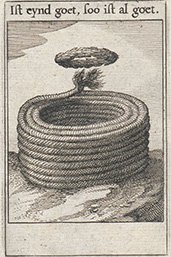 With new editions printed in 1620, 1669 and 1678, it became clear that Sinnepoppen filled a gap in the market. For these editions, Visscher’s daughter Anna added a range of moral verses to the original. She also included ten new emblems and altered some of the prose commentary and the order of the emblems.