The theft of the Weesp Missal

Two years imprisonment, that was the sentence Peter French received in 1973 after he had been arrested for stealing and selling medieval manuscripts. One of these manuscripts was the Weesp Missal, which is now housed in the Special Collections of the Utrecht University Library. The adventures of this stolen Catholic heirloom form a remarkable story.

Peter Joseph French studied at Dartmoor College and got his M.A and in 1970 his Ph.D. in English Literature at the Claremont Colleges (near Los Angeles). In 1969-1970 he worked as a student-assistant at the department of Special Collections of the Honnold Library where the growing collection was being inventoried. From 1955 until his death in 1963 Egerton Lafayette Crispin, professor of Medicine, had given dozens of manuscripts to the Honnold Library. As the registration was still going on and therefore incomplete, French saw his chance to remove the data of a number of manuscripts from the card catalogue. In this way he could erase proof of existence of those manuscripts in the Honnold Library and sell them. This was a frequently used method, similar to the theft of around 1000 books from the library of Lambeth Palace in London which only came to light in April 2013.

Between 1969 and 1972 seven manuscripts and three leaves were offered up for sale at several auctioneering firms, and the proceeds went for the major part to French who had by then moved to England. There he also published the monograph based on his thesis: John Dee: the world of an Elizabethan magus (Londen, 1972; reprint 1984). However, he was not aware of the fact that his theft had already been discovered.

In 1968 professor John Benton had researched a twelfth-century Cistercian manuscript about which he was to publish a book. In 1969 this manuscript was missing, but nobody noticed that it was offered up for sale in December of that year by Christie’s in London. It was obtained by the Beinecke Library of the University of Yale. There it was seen in 1971 by the British expert in codicology Neil Ripley Ker who recognized it as the same manuscript that Benton had described back in Claremont. Beineke Library then returned the book to the Honnold Library (now Ms. Crispin 26).

Now that it had become clear what had happened, the (incomplete) information about Crispin’s donation and its registration was used to work out which manuscripts were stolen. Soon the search led to French. At his arrest in 1973 by the British police, three illuminated leaves were found which he had torn out of medieval manuscripts. These leaves were also returned to the Honnold Library. The rest had been sold, and because the auctioneering firms and the buyers had acted in good faith they were under no obligation to return the manuscripts (Dutschke & Rouse 1986, 3-4, 116-118, 124-126).

This was also true for the Weesp Missal that was bought for the Utrecht University Library by the Amsterdam antiquarian bookseller Nico Israël at a Christie’s auction on 28 June 1972 (no. 21). The catalogue description can still be found at the inside of the front cover. It finally marked the end of a remarkable journey of the Weesp Missal, a journey of thousands of kilometres that had lasted hundreds of years. With the help of documentation and notes in the manuscript itself we can reconstruct part of this journey.

Before the Weesp Missal had made its journey, due to French’ business, from America to England and next to the Netherlands, it had followed this route in reverse order before. Although there were no written documents showing that the manuscript had been housed in the Honnold Library, its librarian had noticed the manuscript among Crispin’s donations. It was described in the 1933 catalogue (no. 152) of Dawson’s Book Shop in Los Angeles where Crispin bought the manuscripts for his collection in the years between 1933 and 1937. In his turn Dawson had bought the manuscript at Sotheby’s (12 December 1932, no. 300) as part of the sale of the collection of John Meade Falkner 1858-1932). This weapon dealer with an interest in liturgical manuscripts had put together an extensive collection by making purchases all over the world.

Where Falkner had bought the manuscript is still a mystery, but on fol. 1v we find a cutting with a description from an old Dutch auction catalogue saying it was ‘in jugtleeren band met sloten’ (‘bound in Russian leather with clamps’). However, it is not known which auction is meant, and it is well possible the sale took place far before Falkner’s days. At the bottom of the original blank page 135r Gerardus Laurentius Bono from Leyden, former curate (sacellanus) in Haarlem, has written that he obtained the manuscript on 10 October 1768. Bono, also known to have been a priest in Oegstgeest, died in 1807. 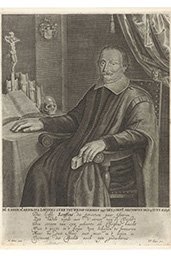 In his turn Laurentius van Rhijn had obtained the missal from the Amsterdam pharmacist and writer-poet Nicolaas (Claas) Seep (1616-1671) (cf. Biemans 2008). In Weesp, in 1646 Seep married Elisabeth Sloot, daughter of the former sheriff and head of the orphanage of Weesp, Gijsbert Sloot (d. 1657). One of Seep’s elegies was about the previous owner of the Weesp Missal, as is shown from the same inscription, namely Arnold Louffius (1597-1656), priest in Weesp. He had entrusted the manuscript to Seep.

On fol. 135r where also Bono wrote his name, we find a long ‘letter’ opening with Ego magister Petrus presbyter ac imperiali auctoritate notarius publicus (‘I, Master Pieter, priest and public notary by imperial assent’) in which the rights of the parish church (Laurentius church) are mentioned, and also that ‘this old book’ (in antiquo libro) belongs to that church. It was dated 1524.

A vertical note in Dutch is dated 1534, but is written by another hand and is about a lease of land. On fol. 1v we find a similar note dated Sunday 25 January 1534, and in dark ink above Ego magister Petrus. This magister is probably the Petrus Tidemannus who is mentioned several times in the text on fol. 135r. This inscription on fol. 135r is definitely important for the early church history of Weesp. Several names are mentioned, and there is a reference to the archdeacon of Sint Salvator (Oudmunster in Utrecht) (cf. Van den Hoven van Genderen 1997, 762).

The journey of the Weesp Missal is a remarkable story that but a few other manuscripts can tell;. After the Laurentius Church had become a Protestant Church around 1582, and in spite of the precarious situation of many Catholics during the Reformation, the manuscript remained in the hands of priests, first in Weesp, and next in the Westland region. With the exception of Nicolaas Seep that is, but apparently he was good friends with the Weesp priest Louffius. Other than that, as far as we can see, it was treated like a kind of Roman Catholic heirloom for three centuries before it finally ended up in foreign hands. For this we need to look again at the inscription on fol. 1v (the transcription is not clear at some points)

Memorial
This book has come from the Catholic Church in Weesp and has been kept by the first citizens (?). And in 1656 it was given from the library of the honourable (?) priest Arnoldus Louffijs to Claes (Arentsz?) Seep in safekeeping. [different handwriting:] And by Nicolaes Seep to the library of the priest Laurentius van Rhijn, and from that library to his nephew Lambertus van Rhijn who was the priest of Pijnakker, and of Leyden, and now of Weesp without flock. Which has sent this book.

So at the end of Lambertus van Rhijn’s life the missal may have come back to Weesp, where it had been used for the first time in the years around 1490. Van Rhijn’s connections with Leyden may explain how the missal ended up in the hands of Bono of Leyden.

A showpiece from Weesp

The Laurentius church in Weesp was consecrated in 1462. Three decades later the Weesp Missal was ordered, and it must have been one of the showpieces of the church. With its 348 folios of approximately 37 by 26 cm it is an impressive manuscript. Most striking feature is the page-filling miniature on fol. 158v, made by one of the Zwarte-Ogen-Meesters (‘Masters of the Dark Eyes’)

The Masters of the Dark Eyes

In her study of the Masters of the Dark Eyes, Klara Broekhuisen distinguishes seven style groups among the over 70 manuscripts which have been attributed to these masters. The Weesp Missal belongs to the Robinson Group, named after a breviary from the collection of Philip R. Robinson. More specifically the Weesp Missal was illuminated by the Master of BPH 63 (a book of hours from the Amsterdam Bibliotheca Philosophica Hermetica) and an unknown master (Broekhuijsen 2009, 203-205) in the period of 1490-1500.

The unknown master was responsible for the page-filling miniature on fol. 158v. It shows the usual illustration at the Te igitur-text of the celebration of the Eucharist: Jesus on the cross, with Mary and John on either side. At the bottom we find a fan-shaped cross in a round “table”. This is the so-called kissing table (osculatorium) on which the priest could press his lips as part of the ritual of the Eucharist instead of kissing the image of Jesus himself. There are a great many books of hours on which such kissing tables (or in its absence the image of Jesus) have become vague, worn and dirtied by intensive use. However, this is not the case in the Weesp Missal. Apparently the priests in Weesp refrained from too much kissing.

There are three historiated initials in the manuscript: on fol. 159r the T of Te igitur illuminated with Jesus in het Garden of Gethsemane; on fol. 8r a praying David is depicted at the beginning of the text of the first part of the Proprium Temporale; and on fol. 167r the resurrection of Christ is shown at the second part (from Easter Sunday onwards). These three historiated initials are the work of the Master of BPH 63. In the latter two the margin decorations show many similarities. They are less profuse than the one at the opening of fols. 158v-159r which is the central part of the manuscript in every respect.

Where the Weesp Missal was produced is still unknown. The Masters of the Dark Eyes are located in the provinces of Holland (Broekhuijsen 2009, 73-77), yet the illuminated initials (for instance fols. 17r and 18v) in the Red Ears-style are associated with Den Bosch (Gerritsen-Geywitz 2003, 289-292). The Weesp Missal was written by one and the same beautiful hand, only fol. 2r-v and 135v are later additions.Fol. 2 contains the mass for the Feast of the Seven Sorrows of Mary on the fourth Friday after Easter (later celebrated on 15 September), fol. 135v songs. 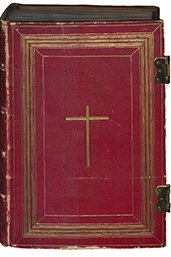 Considering its eventful history, the Weesp Missal is in a fine condition. Only the original binding has been replaced by a red morocco binding with gold stamps and copper clamps. These date back to the 19th or 20th century. This binding was restored in Utrecht in 1973. There are still many missing pieces of the adventures of the Weesp Missal, including details of the theft which was the indirect cause of its arrival in Utrecht. We can no longer ask Peter French, he was killed by a car when crossing the road in 1976, nearly 34 years of age. Through his doings the Honnold Library suffered a considerable and sad loss. The best we can do at present is to return the manuscript virtually so that it can be studied in Claremont or at any other place in the world. In this way the scientific search can be continued.