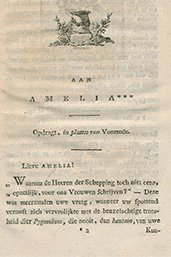 As Salomo said: ‘There is nothing new under the sun’ and his words are met with approval in De Recensent voor Vrouwen (‘The Reviewer for Women’). These beautiful biblical words show great wisdom and I agree with them gladly, although there is something new: that we can read De Recensent voor Vrouwen again in the year 2015. Until recently the journal was untraceable (Jensen 2001, p. 41-45 and p. 246). However the other day, Paul Pestman, staff member of the catalogue department of Utrecht University Library, found this supposedly lost journal in a convolute.

This is good news, because 18th century Dutch journals for a female audience are few and far between. Suzanne van Dijk and Dini Helmers even spoke of there being ‘a sad lack of an original press for women in the Netherlands’ in the 18th century (Van Dijk & Helmers 1991, p. 71-88, p. 80). Literary historian Lotte Jensen, who in 2001 obtained her doctorate with a dissertation on women’s journals and female journalists in the 18th and 19th century, agrees with this statement. For the 18th century she only found five women’s journals of Dutch origin, and all five of them did not last long. One of these was De Recensent voor Vrouwen. Because the journal could not be traced, Jensen could not say anything about its contents, except that it must have contained a review of De geschiedenis der menschheid (1793) (‘The history of mankind’) by Petronella Moens – a reference to this review was found in another publication. Judging by the title, Jensen assumed that for the most part the journal contained book reviews, but she could not say if the reviews were of works written by women. In general, says Jensen, ‘entertainment’ played a major part in these first women’s journals, complicated subjects such as politics were deliberately avoided. Also an attempt was made to create a ‘specific female reading and writing community’; the ladies were encouraged to send in contributions to the journal (Jensen 2001, p. 52).

A journal for and by women?

In itself, finding a copy of De Recensent voor Vrouwen does not increase the poor harvest of women’s journals in 18th century Holland. We already knew of the journal’s existence, but still the number of periodicals that focused on a female audience, was remarkably low in the Netherlands compared to our neighbouring countries England (26), France (17) and Germany (115) (Jensen 2001, p. 26). However, this topic is not discussed here. In any case, De Recensent voor Vrouwen was not very successful, because the monthly journal, published by the Amsterdam publisher J. Alllart (price: fifty cents) stopped after only two issues. However, now that we have found a copy of one of these two issues we can have a look at its content. Was it mainly entertainment, were difficult subjects avoided, were women encouraged to write articles themselves? In other words: what was the tone of the journal? Were women told to know their place or were they encouraged to develop themselves? And were only works written by women reviewed, as Jensen cautiously assumes?

The development of heart and mind 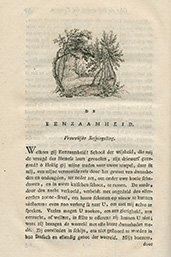 The publisher starts De Recensent voor Vrouwen by a very short introduction for the ‘Dutch female readers’: every month he wants to dedicate a piece to ‘your fair sex’. In this way heart and mind will be formed, and he also hopes for contributions from the readers. Next there is a letter from ‘the editor’ to someone called Amelia. He had it lying around, so he says, and why write a preface when the letter says it all? Many times Amelia had asked him why gentlemen never wrote something for women: ‘We women, aren’t we allowed to know what is said and written about us in the learned world?’ Yes, our editor agrees, and that’s why he decided to start a magazine containing reviews of works about the female sex or which might be of interest to them. They must be good books, and the reviews will be mixed with miscellaneous sections; serious subjects will alternate with innocent jests. This all is meant, let there be no misunderstanding about it, ‘to help develop the ladies’ good taste’

Part 1 contains reviews of: Johannes F. Martinet, Huisboek voor vaderlandsche huisgezinnen (1793) (‘Family book for Dutch households’), the translation by Gerrit van der Voort of F.G. Marezoll’s, Aandachtsboek voor vrouwen (1789) (‘Book of attention for women’), the already mentioned Petronella Moens, Geschiedenis der menschheid (1793), Rhynvis Feith, Lady Johanna Graij. Treurspel (1791) and the oration by Jacobus Kantelaar, Over den invloed der waare Verlichting op het lot der vrouwen en het huwelijksgeluk (1793). (‘About the influence of the true enlightenment on the fate of women and marital happiness’) respectively. In part 2 we find the sequel to the review of Martinet’s Huisboek, next there is a review of the abridged edition of De vaderlandsche historie (1793) by Jan Wagenaar (‘History of the Netherlands’), part 1 of the Beknopte natuurlijke historie der zoogende dieren (1793) by J.D. Pasteur (‘Short natural history of mammals’), Het lijden der Ortenbergsche familie (1793/1794) by A. Kotzenbue (‘The suffering of the Ortenberg family’) and the play Catharina Herman (1793) by Jan J. Vereul.

‘The advantages of a social life’

So these are the books that the gentlemen reviewers of De Recensent voor Vrouwen deem appropriate reading for their female readers. They are about women’s affairs (etiquette, the family, marital happiness) or about women (Lady Gray, Catharina Herman), or they are educational (Dutch history, mammals). Complicated subjects such as political history or the Islam are not necessarily avoided – in this respect Lotte Jensen’s words may need some modification – but need to be in line with the likes and needs of women. In the review of Wagenaar’s De vaderlandsche historie, De Recensent voor Vrouwen again cites extensively from his conversations with Amelia: from the adventures of persons and peoples young people may learn ‘what they owe themselves, humanity, the family and other relations and in particular this country where they enjoy the advantages of a social life’. Does this also apply to our sex, asks Amelia. `Yes,’ replies De Recensent, `in this case your sex is equal to ours’ (p. 61). 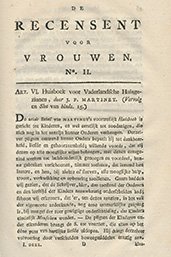 It is remarkable that in its first issue De Recensent voor Vrouwen reasonably succeeded in addressing the female readers explicitly as women. In the second issue this attempt already tails off: the review of Pasteur’s work on mammals for instance is recommended for being so instructive – the special use for women is apparently not clear to the reviewer either. Only one of the reviewed titles is written by a woman (Moens). This immediately answers one of the questions asked above: no, De Recensent voor Vrouwen did not focus especially on works written by women.

The miscellaneous section contains useful pieces such as a discussion on ‘Over de bestemming der vrouwen’, (‘About women’s destination’), an extensive exposé about the different continents, a brief biography of the famous Anna Maria van Schurman (with the inevitable regret that this learned woman succumbed to the zealotic Labadie), the story of the courageous wife of Sachsenhausen, and some light pieces, such as an eastern history, an idyllic scene and particulars about a ‘fruit woman’ from Paris pregnant with her nineteenth child. There are more contributions which are obviously meant to be entertaining, though the moral message is never far away - even stories can be useful. Finally this miscellaneous section also contains a ‘female reflection’ on loneliness and an ‘Ode to God after a thunderstorm’ (including sheet music). The reflection on loneliness is one long call to women to look upon loneliness as a ‘school of wisdom and virtue’. In all this, God is indispensable, but in particular the female readers are called upon to find peace in themselves; it reminds one of a call for mindfulness!

Many passages from the more than 85 pages (the page numbers are a mess) are extraordinarily interesting, revealing, striking and bewildering. More than once terms such as trifling, trifles, trivialities are used – apparently in those days the words to describe the useless lives that women were sometimes forced to lead. In the contribution ‘About the destination of the woman’ critical nuts are cracked concerning eastern cultures, in which the men act as despots and lock their women up in harems. There women pine away and ‘trifle away’ their lives. But also in the western traditions men think they can play the boss, and assume that women’s sole purpose in this life is to please them. 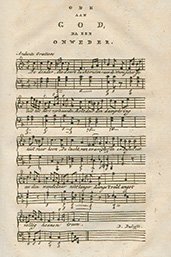 In this way the reprehensible thought arose that women may be idle and that they are free to spend their time with trivialities. In this respect also the word slavery comes up; the last sparks of talent and genius in women are extinguished! Certainly, the man has authority over the woman in marriage, but the marital ties ‘are not meant to give women the low status of a fully dependent female slave. – Women! Know what you are worth!’ says De Recensent voor Vrouwen (Miscellaneous section, p. 1-6). A woman’s destiny is to become a mother, and to produce ‘useful citizens’ for the nation. But De Recensent also understands that not all women may be so fortunate. Thousands of women who will stay unmarried or childless, are forced to waste their time, whereas the Superior Being has also given women a ‘reasonable mind’. They could be a blessing for society.

Source for thinking about the position of women

There are more striking remarks to be cited from this journal, but this selection should suffice. It is a thousand pities that this journal ended after only two issues, because it is so interesting as a source for thinking about the social position of women and their capacities! The two issues of De Recensent voor Vrouwen give us a splendid inside view of late 18th century Dutch opinions on women and what they could do for society, and therefore it is a good thing that the journal can be viewed online here. The atmosphere the articles breathe is one of utilitarianism, belief in progress, optimism, homeliness and Christianity, with a whiff of egalitarianism, the will to change, and – importantly! – much attention for the talents of man. Who is responsible for the contributions is not clear, so there lies a challenge for researchers.