Unique insight into a turbulent period 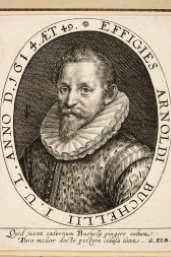 If there is one Utrecht citizen who in his person unites all aspects of the turbulent Reformation period, it must be Aernout van Buchell (Arnoldus Buchelius). He lived from 1565 to 1641 and this means that his life almost completely coincided with the Eighty Years’ War between the Netherlands and Spain. Buchelius lived through it all: wars, iconoclastic outbreaks and religious conflicts, the rise of trade and prosperity, the foundation of the Dutch East India Company and a new era of culture, art and science. About these events he wrote many letters, poems, notebooks and treatises which give a unique insight into a turbulent period, but also a time in which daily life continued as usual.

The major part of Buchelius’ legacy of writings is housed in Utrecht University Library. It is a rich source about the man, his city, his network and his time. Even though he had never received an academic education and had only published one book -posthumously- (Historia Ultrajectina, 1643), as a historian he was respected and consulted by his contemporaries. His notes about monuments both in and outside the city of Utrecht are invaluable, because many of the things he described and copied in drawings no longer exist.

As a bastard son from a wealthy family Buchelius studied law in Douai (Northern France) and later travelled to Italy via Germany. He collected his travel notes in his Diarum of which the present edition in two volumes by Kees Smit covers over a 1000 pages. But Buchelius had both an eye for monuments and inscriptions and for the spiritual life of man. He made a switch from Catholicism to Protestantism and noted down what he experienced as a deacon (supervisor) of the church community and as a trustee of a Utrecht house of correction. He was also a board member of the Dutch East Indian Company for a year. He committed his experiences to his notebooks; the personal style in which they are written makes them so special.