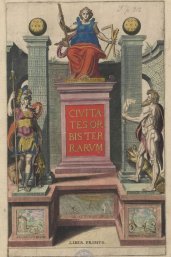 In the 16th century a lot of travelling was done. Save the pilgrims, the number of travelers was higher than ever. Tradesmen, students, ‘tourists’ and other adventurers went from one place to the other in steadily increasing numbers. Cities were most visited, at the time the centres of trade and social life. The interest in cities was at least as great as the interest in countries and regions. Therefore it is no surprise that – two years after the publication of the first modern world atlas in 1570, the Theatrum orbis terrarum by Abraham Ortelius – a book came on the market that tried to describe and depict every city in the world: the Civitates orbis terarrum.

This atlas of cities, which was to amount to six volumes in the end, is generally known as the Civitates orbis terrarum by Georg Braun and Frans Hogenberg. However, the title only refers to the first part which was published in 1572 by Filips Galle in Antwerp and ‘apud Auctores’ (by the authors) in Cologne. Although the Civitates orbis terrarum was also printed in Cologne, based on the Flemish style of engraving the work is a typical cartographic product of the Southern Netherlands. For instance, initiator Frans Hogenberg (1535-1590) was not only one of the engravers of the Civitates, but also of Ortelius’ Theatrum. Another engraver, Simon van den Neuvel (Novellanus) received his training in Mechlin, until he fled to Cologne.

Before the publication of the Civitates, books with town plans were occasionally put on the market. In these printed works, the text was usually more important than the maps. Examples of such books are: Jacopo Filippo da Bergamo Foresti’s Supplementum chronicarum (1483, illustrated from 1486 onwards) and Hartmann Schedel’s Liber chronicarum (1493). The first real town atlases, having a mostly regional character, were published in the third quarter of the 16th century and made by Guillaume Guéroult (Lyon, 1552 and 1553), Antoine du Pinet (Lyon, 1564), Ferdinando Bertelli (Venetië, 1568) and Giulio Ballino (Venetië, 1569). However, the Civitates orbis terrarum is generally considered to be the first worldwide town atlas.

Cologne in Germany was the home base of the canon Georg Braun or Bruin (1541-1622) who was undoubtedly responsible for the compilation and the texts in the Civitates. The preparations for the town atlas must have overlapped those for the Theatrum orbis terrarum with two or three years. At the time Hogenberg was working on both publications and it is not very likely, considering his close connection to Ortelius, that Braun was the only one who had come up with the idea for the atlas. Braun could have met both Ortelius and Hogenberg during his visit to Antwerp in 1566-1568 and it is well possible that in that period all three gentlemen brooded over plans for the Civitates orbis terrarum together. For that matter, contemporary sources consider both atlases as complementary.

Initially the plan was to publish only one volume of the town atlas. But because the book sold so well, the compilers got the idea to publish a second volume and next to expand both volumes. In the introduction to the second volume, Braun asks the readers whose own cities are missing to send illustrations so that it could be included as engravings in one of the two volumes. The response was so overwhelming that the publication of a third volume became possible, later followed by a fourth and a fifth. After the fifth volume was published around 1588 it took almost thirty years to finish the Civitates orbis terrarum: only in 1617 did the sixth and last volume appear. Supplementary to the edition with Latin texts editions with German and French texts were published. Whatever the language, the maps included remained exactly the same.

The six volumes of the Civitates

Each volume of the Civitates orbis terrarum has its own title:

After the death of Frans Hogenberg in 1590, the work on the engravings for the Civitates orbis terrarium was taken over by his son Abraham. Abraham printed a large number of editions during the late 16th and early 17th century. He also added the sixth volume in 1617. Due to the lack of imprints or colophons the several editions are hardly distinguishable.
Until approximately 1640 new editions were published of each volume, reprints that remained almost always unchanged. Only the editions published after 1630 are characterized by updated explanatory texts. These texts concern the history of the cities, the major buildings and their most distinguished inhabitants.

In total the six volumes of the Civitates orbis terrarium contain 363 leaves with town plans, city views and profiles of cities in Europe, Africa, Asia and America (Mexico City, Cuzco). Jerusalem and Rome each consist of two separate leaves, whereas Krakow and Antwerp consist of two leaves joined together. All in all the 363 leaves contain 543 different representations of 475 cities and four other illustrations.
Actually the work is more topographic than cartographic in nature: there is a large variation in illustrations of cities, real town plans, perspective bird’s eye views, town profiles and all forms in between. In addition we find landscape scenes of villages and small towns. However, as to the number of illustrations the six volumes show little difference. Five of the six volumes count 58 or 59 illustrations, the fifth volume has ten more.

Although a supposed connection with Ortelius’ atlas is rather obvious, it turns out that the Civitates orbis terrarum is less systematically constructed. After all, including a town plan depended on the availability of a map source and on the wish to fill the work with as many cities as possible. The choice the compiler made was far from rational. In the first place this can be concluded from the speed in which randomly supplied town plans were included. Secondly the various countries are unequally and sometimes arbitrarily divided among the several volumes. Especially German and Dutch cities are overrepresented. However it must be said that each volume forms its own unity with the cities in a fixed geographical order: British Isles, Spain and Portugal, France, the Low Countries, Germany, Scandinavia, Eastern Europe, Africa, the East and West Indies, Turkey.

Several illustrations of a city

The method used resulted in some cities being represented with several profiles and town plans in the Civitates. When the compilers acquired a new illustration of a city they included it in a next volume. It did not matter if the city had already been included in a previous volume and the previous map in question was not deleted from that particular volume either. That is why over fifty cities appear twice in several volumes. And some cities, including Rome and Jerusalem, even three times.

As said before, Dutch and German cities are overrepresented in the Civitates, but also cities in Central Italy and Andalusia occur frequently. On the other hand the work counts relatively few plans and profiles of British and French cities. In the sixth volume, the last, comparatively many cities from eastern Central Europe are portrayed. This relates to the Russo-Turkish Wars of that period and many illustrations from this volume mainly show cities under siege instead of the usual town plans. All in all the Civitates is not so much a representation of 16th century urban Europe but it shows the availability of city illustrations in Cologne and Antwerp around 1600.

Only a small part of the illustrations in the Civitates has been made especially for the atlas by Hogenberg and Novellanus. The major part of the designs originates primarily from two well-known topographic illustrators: Joris Hoefnagel (1542-1600); 63 city views, of which 28 in volume five) and Jacob van Deventer (48 town plans in volumes three and four). Other original source material comes from Ortelius, Sebastian Münster, Pieter Breughel, Hieronymous Schol, Lucas van Valkenborch, Joost Murer, Diederich Bangs and Heinrich von Rantzau (1526-1598), deputy king of Schleswig-Holstein. Finally a considerable part of the town plans is based on printed maps which occur in previously published works including Münsters Cosmographia (1550 and later), Guicciardini’s Descrittione di tutti i Paesi Bassi (1567 and later) and Speed’s Theatre of the empire of Great Britaine (1611-1612).

Characteristic of the town plans and profiles in the Civitates are the figures depicted in the foreground. They are dressed in the widely used costumes of the city in question. In itself providing lots of information, but according to Georg Braun including these costumed figures served another purpose altogether. In the introduction to the 1572 edition he writes (translated):

‘Nobody has to be afraid that our work may harm the Christians in any way, because with its help their major cities could be conquered by the enemy. That danger, which is rather real, is avoided in this way. We asked the different kinds of clothing of all nations and several people to be drawn at each city, both of the high and low classes. The reason is because the bloodthirsty Turks, who are not allowed to look upon representations of the human form, will never allow this book, however great their use for it may be’!

Reasoning the other way around, the cities sieged by the Turks could be reconquered with the help of the town plans in the Civitates. According to Braun they will help you discover what the walls and defences of a certain city look like and how to best conquer that particular city.

The town atlases by Braun and Hogenberg did not have to fear any competition. For a long period of time no other publishers published their own town atlases. Only in 1649 did Joan Blaeu publish a town atlas in folio format. Probably after Abraham Hogenberg’s death in 1653 Johannes Janssonius obtained the 363 copperplates. In 1657 he used the plates for his eight-volume town atlas of the world. Later still several copperplates would be republished by publishers such as Janssonius van Waesberge, De Wit, Mortier and Van der Aa. Even in the late 1700s at the Amsterdam publishing house Covens & Mortier copies rolled from the press, although the impressions had by then become fairly vague. 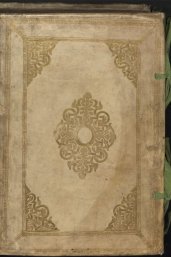 The copy presented here (T fol 212 Rar) is a Latin edition from the early 17th century. The six volumes of this copy can successively be identified as the editions of 1612 (volume one and two), 1606, (volume three), 1617 (volumes four and five) and 1618 (volume six), making it likely that the set was compiled between 1618 and 1623. After all, in 1623 new editions were published of the volumes one, two and five. The six volumes are bound in two large bindings. The beautiful colouring is contemporary and tastefully modest.

The city of Utrecht is in the first volume (plate 19). The explanation at the bottom left and right states the following facts: ‘Trajectum [Ultrajectum, Utrecht] is a famous old cathedral city. It is called Trajectum because it is situated on the other side of the old Rhine. It should not be confused with Trajectum Mosae [Maastricht]. The illustrator is Jacob Meyer from Flanders. The Saint Martin (the Dom Tower) is without any doubt the most famous church. Some claim it is part of the province of Holland, others say it belongs to Friesland’. But of course nowadays there is no doubt in our minds that it belongs to the province of Utrecht!