The artist of this work is referred to as the Master of Zweder van Culemborg, although his actual name is unknown. He was a key figure in illuminated art in Utrecht in the 1430s. Four of his works are found in the Utrecht University Library manuscript collection.

Most lavishly decorated is an illuminated book of hours (Hs.1037), originally belonging to the collection of Balthazar Huydecoper (1695-1778). On the first page of a manuscript containing the Confessions (Confessiones) of Church Father St. Augustine, there is a portrait of the author dressed in bishop’s regalia (Ms. 41). The manuscript previously belonged to the library of the Carthusian monastery Nieuwlicht in Utrecht.

The other two manuscripts were not acquired until later, at auctions. In 1996, Utrecht University Library purchased a book of hours at an auction at Sotheby’s in London, which, in its current state, contains two historiated initials and three full-page miniatures (Ms. 16 B 8). Somewhat longer ago, in 1960, a full-page miniature from a famous breviary was acquired, also at Sotheby’s. 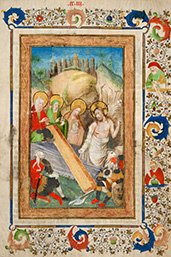 A breviary (derived from the Latin breviarium) is a book containing the spoken and sung texts of the officein an abbreviated form – hence the name. The page purchased in 1960 was originally part of an extensive, richly-illuminated breviary which has been kept at the Pierpont Morgan Library in New York (Ms. M. 87) since 1902.

In its current state, the breviary has an impressive 433 pages, each one of which has a painted margin illumination on each side. It also contains 81 column miniatures, twelve calendar illustrations and many historiated initials.

The work on this breviary was contracted out to several illuminators, who had two distinctly different  styles, but still cooperated in the effort. Some can be attributed to the Masters of Otto van Moerdrecht, while others are credited to the ‘more modern’ Masters of Zweder van Culemborg. It is difficult to differentiate the work of the various artists within these groups.

Several coats of arms on the first page indicate that the breviary must have been created for a duke of Guelders-Jülich, most likely duke Arnold van Egmond (1423-1473), hencethe breviary is called the Egmond Breviary. At the age of seven, Arnold married Catharine of Cleves, who was the first to own the undisputed masterpiece of manuscript illumination from the northern Netherlands: the illustrious Hours of Catherine of Cleves, which is also kept at the Pierpont Morgan Library.

Exactly when the five full-page miniatures once found in the Egmond Breviary were cut out is unknown, but it was sometime before 1902. Three of them were preserved and are now kept at the Fitzwilliam Museum in Cambridge (Ms. 1-1960), in the British Library in London (Ms. Add. 30,339, no. 3) and in Utrecht. The last of these depicts the Resurrection of Christ.

As both of the Roman soldiers sleep, one with his arm resting on a shield with a Gorgon’s head, symbol of Minerva, Jesus rises from the grave, with a banner of the cross in his hand. In the background, the three Marias are already approaching, who will later find an empty tomb.

In the right-hand margin, the upper body of two old men are pictured, each of which holds a speech scroll. The text on both speech rolls was derived from the Book of Revelation 5:5 and here spoken by one of the 24 elders.

The Easter Vigil begins on the reverse of the page. It comes from the temporal part of the breviary, which covers the Christian holidays from the Advent, four weeks before Christmas, to the Trinity or Trinity Sunday, the first Sunday after Whitsun. Saint Peter is pictured in the initial. The text on the speech scroll he holds is derived from Colossians 3:1 and is continued on the banderols of both of the old men whose upper bodies were pictured on the front, and who also appear here in the margin.