The Roman Netherlands reconstructed: a pamphlet on Roman place names

In the 16th and 17th century more and more scholars got interested in the Roman history of the Low Countries. One of these scholars was Aubertus Miraeus (1573-1640), an Antwerp canon and historian. He published this pamphlet with all kinds of Roman toponyms or place names which he tried to link to the existing towns and places. The pamphlet sheds light on the scholarly attempts of those days to resolve the uncertainties concerning the limes, the borders of the Roman Empire.

Around 1500 ‘The Roman Netherlands’ were still terra incognita. Nobody wondered what our country had looked like in those days. The books that Tacitus had written about the Germans and the Batavians were gathering dust in the convent libraries. The Italian humanists were the ones who became interested in this topic and started to publish the manuscripts in print. But what were the Dutch historians to do with place names such as ‘Batavodurum’, ‘Grinnes’, ‘Vada’, and ‘Arenacium’?

All this changed when the Itinerarium Antonini became known. This travel guide from the 3rd century, republished in Paris in 1512, contains five names related to our country: ‘Lugdunum’, ‘Albaniana’, ‘Traiectum’, ‘Mannaricium’ and ‘Carvo’. No problems here. ‘Lugdunum’ was presumed to be Leyden of course, ‘Albaniana’ was Alphen aan den Rijn and in the Middle Ages ‘Traiectum’ had always been the Latin name for Utrecht. Strangely enough, ‘Noviomagus’ (Nijmegen) is not mentioned in the Itinerarium.

Besides the topographical discoveries, an increasing number of archeological discoveries, (stones carrying inscriptions, coins) were made all along the Rhine in the 16th century. At the same time there was a growing interest for the Batavians, whom Tacitus saw as brave allies. Their rebellion against the Romans was compared to the contemporary resistance against Spain. Where exactly the Island of the Batavians was situated became an important matter of controversy, because an increasing number of cities wanted to be located in that historical area.

The ‘discovery’ of the Peutinger map

And then, at the end of the 16th century the Peutinger map came into view containing a number of new place names. This schematic ‘road map’ had been copied after a Roman original in the 13th century, and later came into the hands of Konrad Peutinger (1465-1547). In 1598 a print version of this map was published. The first scholar to try to link the ‘Dutch’ names to the Roman ones was Philippus Cluverius (1580-1622), the Leiden professor. In 1616 he published his substantial Germaniae antiquae libri tres.

New data on the Roman era

Suddenly, Dutch historians and geographers possessed completely new data about our country in the Roman era around the year 400. On the historical map of Petrus Diveaeus from Mechelen (in De Galliae Belgicae Antiquitatibus Liber I, 1584) therefore, we see the toponyms ‘Lugdunum’, ‘Trajectum’, ‘Batavodurum’, ‘Grinnes’, ‘Vada’, ‘Arenacum’ and ‘Noviomagus’. The map by Ortelius, Belgii veteris typus (1584, new edition 1594/95) contains the same names but also ‘Mannaricium’. This place and also ‘Traiectum’ are missing on the Peutinger map which mentions a number of new places for this traject, but also indicates a second route through the Betuwe.

A map of The Roman Netherlands

Also Aubertus Miraeus set to work with the new information about the Roman place names. The Antwerp canon and historian published many works, especially in the field of church history. But he also had an extraordinary interest in the Roman era. In 1633 he published a map of the Roman Netherlands Galliæ Belgicæ svb Impp. Romanis et Viarvm in ea militarivm typus (‘Map of Belgian Gallia under the Roman emperors and of the military highways in that area), published by Petrus Verbistus or Pierre Verbist. It concerns the earliest map on which the Roman roads are reconstructed. 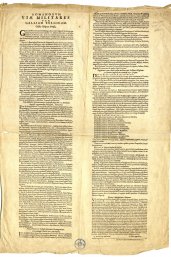 To the map belongs this pamphlet, an unfolded sheet from the same year: Romanorvm viæ militares per Galliam Belgicam. On that pamphlet Miraeus mentions the old familiar place names from Antoninus’ Itinerarium with the, according to him, current names in italics:

Next the Northern Dutch toponyms along the military roads from the relatively recent discovered Peutinger map, starting at the Rhine estuary

In addition to an attempt to explain the Roman toponyms from the Itinerarium Antonini and the Peutinger map, the pamphlet teaches us more about the territorial division from those days. In the first paragraph for instance, Miraeus describes the division of Gallia Belgica, the northern part of Gallia. It consisted of Belgica prima, around Trier, and Belgica secunda, which covered a large part of Northern France and Flanders. Germania prima was situated around Mainz, Germania secunda or inferiori had Cologne (Colonia) as its capital. There was also Toxandria, of which the Zeeland islands were a part. In the last text sections Miraeus gives an overview of the administrative and military division, with commanders and deputy kings of Gallia and Germania. He also gives some information about the (weapon) industry, the treasure rooms and the coinage in these areas.

In1633 Miraeus published another four page publication belonging to his map: Les grands chemins de l’Empire Romain, vulgairement dits chaußees de Brunehaul. These were the Roman roads in Gallia, later repaired by Brunhilde, queen of Austrasia. It is a description of the seven Roman roads which led from Bavay in Northern France to all directions, followed by an extensive alphabetical list of the Latin place names in Belgian Gallia, including the modern names, printed at Abraham Verhoeven at Antwerp.

Of Miraeus’ map and explanatory notes only a small number have remained, and we may wonder if his publications made much of an impression on his contemporaries. But today the documents show us the interest people then had in the Roman era and the efforts of those days to reconstruct the Roman places and military roads.

For an online database with names occurring on the Peutinger map and linked to current toponyms according to the latest insights: http://www.cambridge.org/us/talbert. See also the Roman routeplanner developed by René Voorburg: http://www.omnesviae.org/.