“Coping with uncertainty: imagination, reason, and the need for diversity of response” 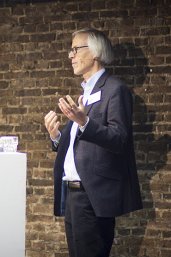 Richard Bronk is a Visiting Fellow at the European Institute (L.S.E.), with a career spanning finance, central banking and university teaching and the author of 'The Romantic Economist - Imagination in Economics'.

Bronk opened the conference with a keynote that provided a philosophical foundation for the day. In this plenary, the nature of the imagination, the role it plays in innovation and economics, and how it interacts with reason in conditions of uncertainty was discussed. In a presentation whose style reflected the intellectual pursuit of Bronk, the intersection of philosophy and economics, many diverse disciplines were drawn upon to weave a narrative about the relationship between reason and imagination. Calling on a range of ideas from Romantic poets like Wordsworth and Keats, to economists like Keynes and Mill, Bronk finds that: “We have all too often overlooked that reason and imagination are both essential...neither is complete or effective without the other.”

There is a core tension in this relationship, however. While “reason can neither deduce futures yet-to-be-created, nor predict novelties as yet unimagined, imaginaries can be equally dangerous...” This paradox was elaborated on further to explain that there is a challenge posed by imagination, which can both work to liberate us and allow us to innovate, however, it can also result in almost violent uncertainty if not employed correctly.

The way forward is in creating a link between uncertainty and imagination on the one hand, and reason and rationalism on the other. In this balanced approach, imagination enables a necessary escape from the illusion that there is a single rational answer to how we ought to live (the idea that “there is no alternative”). Reason, then, can serve as a “diagnostic tool” with which to “stress-test” these new and fanciful ideas in order to carefully anticipate their consequences.

Bronk therefore advocated for a ‘reasoning imagination’ in order to strike a balance between the uncertainties we face, the potential of human imagination, and the rationality of modern political economic thought. This results not in a dogmatic preference of one approach over the other, but rather leads to a “diversity of response”.

“Urban futures: palimpsest of the imagination” 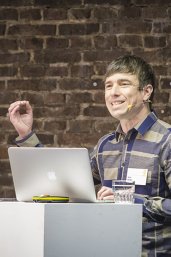 Professor Nick Dunn is Executive Director of Imagination Lancaster, and Professor at Lancaster University, where he is also Chair of Urban Design.

Professor Nick Dunn’s keynote posed a series of challenging questions to the audience about how – and by whom – urban futures are imagined. Travelling through the history of imagining urban futures, Dunn demonstrated the ways in which our thinking about urban futures is often rooted in the past. Furthermore, he argued that while most of our culture’s future visions tend to excel at projecting technological visions of the future, the underlying social dynamics and power structures are often not addressed. Dunn's presentation contained a vast repertoire of images to illustrate this ‘history of urban futures’ clearly.

Dunn’s history of the future began with the quintessential Futurama of 1939, touching on a number of key milestones on the path to the present, including the important role of new media and technology. Running through this narrative was the argument that most of these popular visions of the future – throughout modern history – have been predominantly technologically driven, rather than socially embedded and innovative.

In our current age of mass-media and explosive visual cultures, the problem is not, Dunn argued, that the ideas we have are unattainable, but that they are not that imaginative to begin with. In Dunn’s own words: “we are not actually being radical enough”. While the technology to create elaborate and immersive imaginaries is available to us, we struggle to arrive at truly innovative ideas. Instead, we tend to look to the past for visions of the futures: “we find ourselves struggling, grasping for radical alternatives for urban futures or resuscitating the ghosts of previous ideas.”

Dunn therefore argued that more visions, more ideas and more radical imaginations about the future are necessary, particularly ones that include social characteristics of the city. He called for a careful analysis of the hidden power structures underlying the “dominant futures presented at us”, and the production of truly innovative imaginaries that can serve as platforms around which to stage participatory debates and discussions about urban futures.