Locations and areas to include in your search

Many students want to live in Utrecht, and areas such as the historic city centre are in high demand among students. Because student accommodation in the City of Utrecht is hard to get, students often live in the surrounding municipalities or in other large cities in the Netherlands. Broadening your search by also considering accommodation outside the City of Utrecht can increase your chances of finding housing.

The Province of Utrecht is roughly the same size as England’s capital London and holds twenty-six municipalities, of which the municipality of Utrecht is one. Dutch and international students quite often choose to live in neighboring municipalities such as De Bilt, Zeist, Bunnik, Houten, Nieuwegein, IJsselstein, Woerden and Maarssen or in neighbouring towns such as Vleuten, Driebergen, Bilthoven, De Meern and Stichtse Vecht. Follow this link to download a map of the Province of Utrecht or click to enlarge the images below.

The Netherlands is a relatively small country where even large cities are in quite close proximity to each other. The following cities have a short travel time from Utrecht Central Station (CS) by train: 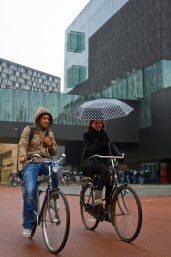 The Dutch government cares for safe cycling tracks separated from the road. This makes the Netherlands a bike-friendly country. Because cycling is a healthy, affordable and sustainable method of travelling, many students living in the surrounding municipalities and towns prefer to commute to the city and the university by bicycle. No matter the weather!

The towns, cities and municipalities named above are quite close to the City of Utrecht and have a good bus, tram and/or train connection. If you expect to frequently travel with public transport in the Netherlands, it could pay off to take out a discount subscription with the Dutch train service, or the Dutch bus, tram and metro services. To get a sense of the travel time you can also consult the website for Dutch public transportation.