The European Research Council has awarded Prof. Piet Gros of Utrecht University his second ERC Advanced Grant. The grant of almost 2.5 million Euros enables him to take his research into our immune system in a new direction. Gros studies how proteins in our blood determine whether a cell is healthy or not, and should therefore be protected or cleared from our body. Problems with the clearance of injured cells appear to play a role in more and more diseases, but scientists know little as yet about the crucial first step in this process, how are injured cells distinguished from healthy ones.

Piet Gros is a pioneer in research into the complement system. In humans and animals, the complement system is a first line of defence against pathogens. “When I started on this research 15 years ago, a session on the complement system at the largest international immunology conference would attract around a dozen researchers. But today, it can draw hundreds”, Gros explains. In 2010, his ground-breaking research won him the NWO Spinoza Prize, the highest Dutch award in the field of science. On 13 April, his major contributions to our understanding of the complement system are also recognised with the Gregori Aminoff Prize in Crystallography 2018, awarded by the Royal Swedish Academy of Sciences.

Fate of the cell 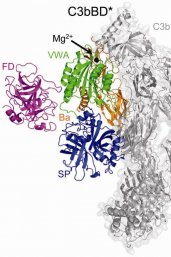 “What I realised is that we have learned much about the complement system, but not what it is that makes the proteins involved determine whether a cell is healthy or not. And yet that is a crucial, and biologically extremely relevant, question”, says Gros. Scientists are discovering an increasing number of diseases in which the functioning of the complement system is disrupted.

In some diseases, something goes wrong in the differentiation between healthy and injured cells, which causes the complement system to eliminate healthy cells. This has long been known for diseases such as arthritis and age-related blindness, but since then also has been assessed to play a role in the rejection of transplanted organs and tissue damage after a heart attack or stroke. Recent additions to this list include schizophrenia, Alzheimer’s disease and the paralysing and life-threatening form of the Guillain-Barré syndrome. “Hence the biological importance of the complement system appears to be much greater than simply a first line of defence against viruses and bacteria”, Gros adds.

The selection of sick or healthy cells by complement proteins is based on something located on the outside of the cell, in the cell membrane, and Gros has an idea of what to look for. However, research into the molecular processes in the cell membrane is an entirely new challenge for him.

The cell membrane is made up of proteins, sugars and lipids that interact in a variety of ways, for example to transport substances in and out of the cell. Gros: “Until recently, it has been extremely difficult to study these interactions, due to the enormous range of length scales: from a few Ångström for atomic interactions, to tens of nanometres for interactions between protein complexes. That’s a factor of 100 difference. But now, the amazing developments in imaging techniques make it possible to see the interactions at all of those different length scales.”

The visualization of an important ‘on switch’ for the complement system

Gros’ research has only been possible due to constant innovations and smart combinations of imaging techniques. In February, Gros and his colleagues at the Leiden University Medical Centre published an article in Science about how they used a new method to visualise an important ‘on switch’ for the complement system. For this ERC project, he will build on research conducted by his fellow Prof. Gerrit van Meer, and will collaborate with his colleagues Prof. Antoinette Killian (Membrane Biochemistry and Biophysics), Dr. Lukas Kapitein (Fluorescence Microscopy) and Prof. Friedrich Förster (Cryo-electron Microscopy and Cryo-electron Tomography) from Utrecht University.

This research is conducted within the research theme Science for Life, part of Utrecht University’s interdisciplinary research programme Life Sciences.