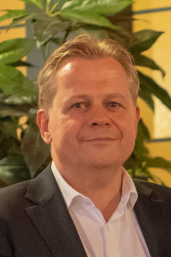 As of 1 August, Frank van der Stappen is appointed as Professor of Robotics and Automation. His appointment is a combined position at both the Department of Computer Science at Utrecht University and the Department of Engineering at University College Roosevelt (UCR). At UCR he is closely associated with the new specialization Engineering within the Liberal Arts and Sciences Bachelor programme. The committee praised Van der Stappen for his expertise and enthusiasm in both research and education.

Frank van der Stappen is an active and internationally respected researcher with a large network of research collaborations. He has a broad interest and vision on how to tackle social problems in robotics and on collaborations with external partners in this field. Van der Stappen is also an inspirer. He motivates young people in their research and guides them in a positive way. He is highly appreciated by students and colleagues in education.

His expertise in robotics is particularly relevant for the province of Zeeland, as fruit and vegetables can be picked with robotic arms. His background in the field of robotic manipulation and grasping is a perfect match.

Although his appointment is mainly at UCR (0.8 fte) and only for a small part at UU (0.1 fte), Van der Stappen continues to do research at UU. His role as head of department at UCR enables him to act as a hinge between the two institutions, and as a liaison with relevant stakeholders in Zeeland and in national and international networks.