Sex, Sin, and Scholarship in the Seventeenth-Century Dutch Republic

The Banishment of Beverland

On 19 March Brill published The Banishment of Beverland. Sex, Sin, and Scholarship in the Seventeenth-Century Dutch Republic, a book by Dr Karen Hollewand (Cultural History).

In 1679 Hadriaan Beverland (1650-1716) was banished from the province of Holland. Why was this humanist scholar exiled from one of the most tolerant parts of Europe in the seventeenth century? To answer this question, this book places Beverland’s writings on sex, sin, and scholarship in their historical context for the first time.

Beverland argued that sexual lust was the original sin and highlighted the importance of sex in human nature, ancient history, and his own society. His audacious works hit a raw nerve: Dutch theologians accused him of atheism, he was abandoned by his humanist colleagues, and he was banished by the University of Leiden. 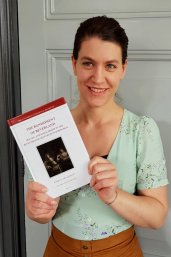 By positioning Beverland’s extraordinary scholarship in the context of the seventeenth-century Dutch Republic, this book examines how his radical studies challenged the intellectual, ecclesiastical, and political elite, providing a fresh perspective upon the Dutch Republic in the last decades of its Golden Age.