The Executive Board has appointed Anastassis Perrakis to the post of Professor of Macromolecular Structures at the Faculty of Science’s Department of Chemistry. Perrakis is a researcher at the Netherlands Cancer Institute and an expert in unravelling cancer proteins. 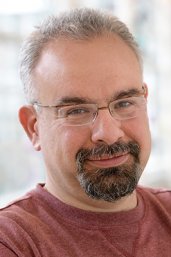 Biochemist Anastassis Perrakis studies the proteins that play a role in the development of cancer, but he also develops techniques for analysing these structures. In his field, he is mainly known for his contributions to macromolecular crystallography, that studies the structure of proteins and their complexes with other macromolecules and drugs.

The most important method for analysing proteins is X-ray diffraction, a technique that makes it possible to determine the positions of atoms in a protein with extreme accuracy. The various software tools that Perrakis has developed make the process faster and more effective.

Together with his research group at the Netherlands Cancer Institute, in 1999 Perrakis developed the software ARP/wARP, which is now commonly used to build the structure of a protein from an X-ray experiment. “With this software, crystallographers can automatically create a structure model of a molecule based on their own X-ray experiments, whether they are new to the field or already have plenty of experience”, according to Perrakis. “In the past, they had to spend weeks, or even months, in front of expensive computer equipment.” The ARP/wARP software has a few thousand users and has been cited in scientific publications more than 5,000 times.

Over the past few years, the group led by Perrakis laid the foundations for a system for improving or re-creating models for the global Protein Data Bank (PDB) after they are published. The database is consulted around 100,000 times per month. Perrakis: “Our PDB-REDO makes it possible to adapt the proteins in the public PDB database to better quality taking advantage of new algorithms we and others are developing.”

Every tumour is unique

The Netherlands Cancer Institute combines fundamental, translational and clinical research with patient care, with the ambition to unravel cancer and to treat every patient individually. In so doing, the new chair position will help answer a question from the National Science Agenda: Every tumour is unique: how can we understand the disease cancer so well that we can develop a therapy for each type of cancer?

Perrakis’ research is also important for the evaluation of existing medications and for developing new ones. In these efforts, Perrakis works together with major pharmaceutical companies, such as Janssen Pharmaceuticals. Perrakis: “We want to know how proteins behave in the vicinity of other proteins, and what influence that has on the molecular structure, the physiology of humans and the development of cancer.” Eventually, this knowledge may even contribute to the development of personalised medications.

The endowed chair of the Netherlands Cancer Institute was awarded to Utrecht University due to its expertise in the field of structural biology. The chair group is embedded in the Bijvoet Center for Biomolecular Research Crystalline and Structural Chemistry section, which had already attracted considerable knowledge about biomolecular techniques. Together with Prof. Rolf Boelens from the Bijvoet Center, Perrakis coordinates the EU project iNEXT, an international research infrastructure for protein crystallography, biomolecular NMR and electron microscopy with 23 partners.

Perrakis will also collaborate with other research groups in the Faculty of Science and UMC Utrecht. His research will contribute to Utrecht’s interdisciplinary cooperation in the field of the Life Sciences.

In his new position, Perrakis will also be involved in the educational activities of the Bachelor’s and Master’s study programmes and in supervising Utrecht University’s Molecular Life Sciences PhD candidates.

Anastassis Perrakis earned his BSc in Biology at the University of Athens in 1992, then went on to earn his PhD in Chemistry at the University of York, England in 1996. In 1996-97, he worked at the Netherlands Cancer Institute as part of an EMBO long-term postdoctoral fellowship. From 1998 to 2000, he served as a staff scientist and team leader at the EMBL in Grenoble, France. In 2001, Perrakis returned to the Netherlands Cancer Institute as an AvL Fellow, which is comparable to the position of a university lecturer, and in 2005 he was appointed as a Principal Investigator, which is comparable to the post of Associate Professor. Since 2008, he has been the scientific head of the Netherlands Cancer Institute Protein Facility, and last year he assumed responsibility for the Research High Performance Computing facilities as well.

Perrakis has received more than 10 million Euros in research grants over his career, including grants from the EU, NWO, KWF Kankerbestrijding and the American National Institute of Health. He has published more than 100 scientific articles, has been cited more than 10,000 times, and works together with several pharmaceutical companies.