“Follow your curiosity and choose what excites you most,” is the advice of Annemarie van Geel to incoming students. A University College Utrecht graduate from 2003, she certainly has followed her own path. Recently, she published a book about Saudi Arabian women.

The Dutch-language book Hakken in het zand: Saoedische vrouwen over hun levens is a follow-up of her PhD thesis ‘For Women Only’: Gender Segregation, Islam and Modernity in Saudi Arabia and Kuwait’, which she finished only two years ago. The title summarises her scope of her academic interests. However, Annemarie has consciously chosen for an even wider perspective outside the academia.

In their own voices

“After having completed my PhD, I felt called to write a more accessible, ‘human interest’ book, focusing on the life stories of women in Saudi Arabia. Many of the women I had met urged me to relay their stories, especially outside of academia. They wished for their own voices to be heard, rather than being talked about by others. The topics vary from dating and playing sports to female artists’ work and women’s rights activism. I also write about the political context, explaining why the position of women is the way it is today, and what’s going on in Saudi Arabia under crown prince Mohammed bin Salman. I absolutely loved writing this book. Before that, I also did a lot of consultancy work, for example for Dutch NGOs that work in the Middle East, and businesses that send employees out to the Middle East.”

Already twenty years ago, it was her broad interest that brought Annemarie to University College Utrecht.

“I had taken a gap year before starting at the College. I did not want to pin myself to just one single subject. I was interested in religious studies, but also in psychology and anthropology, and during my gap year, I had travelled to the Middle East, and that sparked my interest.”

“After graduation, I went to do my MPhil programme in International Relations at Cambridge, with a specialisation in Middle Eastern politics. Middle Eastern studies seemed to combine all my interests, and that triggered my curiosity to delve deeper and learn Arabic. Even now, it is the broad view that keeps me on going. I am strongly interested in women’s rights, religion, as well as in arts in the Gulf Region.”

“The women I interviewed were very openhearted. They took me to meet their families, to weddings, shopping, and religious study groups. Some were activists and wanted to change things, while others were quite content with things as they are. But what strikes me is the resilience of all of them. “

Now that her book has been published, Annemarie is free to take up new challenges. She has just been installed as a member of the Supervisory Board of the National Museum of Antiquities in Leiden. “I am very happy with the position, as I have been keen to move more towards the museum sector for a long time already. I feel excited to be able to contribute to this important museum from the angle of my expertise,” she says. But right in the following sentence she acknowledges not being good at standing still:

“Ever since I was 15 or 16 years old, I have been moving from one thing to the next, often literally moving from one country to the other. Now is the first time I don’t have the next project waiting. I had meant to take it calmer after my PhD defence, but that didn’t happen. Now, after over 20 years, it is good to be able to catch my breath. At the moment, I am open for new opportunities. I am positive something fresh will cross my path. I am also hoping that my book will be translated into English.”

A sense of community

“What I enjoyed most at University College Utrecht, was probably being part of the pioneering generation. It had a feeling of starting something completely new,” Annemarie says.

“I enjoyed the sense of community, knowing everyone, living and studying together and getting to know each other really well. It was a close community. The small scale of the College fit me very well. I still have close friendships from that time.”

Only four years after graduating from the College, Annemarie returned, now to teach the History and Politics of the Arab-Israeli Conflict course. “The first year I taught the course was very special. I had been away from campus for only a few years, and I felt it was easy to connect with the students, as the age gap between me and students was small.”

“I would recommend new incoming students to treat the College as a candy shop. That’s how I felt. What I mean by it is that it is important to follow your curiosity and do what excites you most. It’s quite challenging to stay with your own curiosity, independent of what others say and think. If I look back at my choices, I think going for the candies I liked best has brought me most.” 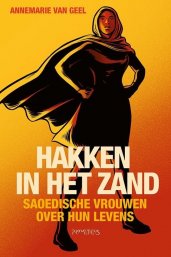 Hakken in het zand: Saoedische vrouwen over hun levens was published by Prometheus.