A maritime atlas for the well-to-do

Beautifully hand-coloured maps adorn this Utrecht copy of Pieter Goos’ Zee-atlas ofte waterwereld (‘Maritime atlas or water world’) from circa 1677. Most striking in this atlas are the large portolan maps of Europe, the Atlantic Ocean and the Indian Ocean which were added at a later stage. The hand-colouring of these maps, including raised gold leaf decorations, is so spectacular that a so-called master illustrator must have been responsible, possibly the famous Dirk Jansz. van Santen (1637-1708). Also the other, ‘average’ atlas maps boast tasteful colours. But why should an atlas which is at first sight meant for everyday use be so beautifully illustrated?

Goos’ Zee-atlas was produced in the golden age of the North Netherlands maritime cartography. The production of and trade in maritime maps, seamen’s guides and maritime atlases developed from the middle of the 16th century as an independent branch within the commercial cartography. In the 17th century and especially in the period between 1620 and 1700 the trade in seamen’s guides and maritime atlases flourished. Together with this growth an increasing competition in the field of maritime cartography manifested itself from ca. 1630. Especially for the seamen’s guides -  printed navigational directions to complement the maritime maps -  the publishers  Blaeu, Janssonius en Colom competed heavily for the best place on the market. From 1660 the businesses of Goos, the Lootsman brothers and Doncker ran the show in this field.

With the publication of Johannes Janssonius' Water-weereld (‘Water world’) in 1650 a new market for maritime atlases was opened up. It so happened that this Amsterdam publisher was busy compiling a full cosmography. The description of the earth does not stop at the coasts, he wrote in the introduction of the fifth volume of his Novus Atlas. A description of the earth is not complete without maritime and coastal maps. And so the first real maritime atlas was produced, which Janssonius combined with a historical atlas. Since 1584 numerous seamen’s guides had been made, but a collection of maps bound in folio for general use had not been published before.

Maritime atlases on the market

The publication of the Water-weereld had a knock-on effect on other publishers who before had only been busy with purely navigational works such as seamen’s guides. It was a hole in the market quite easily filled by Amsterdam publishers such as Arnold Colom, Jacobus Robijn en Pieter Goos. After all, they already had the disposal of maritime maps from their earlier seamen’s guides. Of course, each publisher thought his most recent publication to be the best.  In this way one publisher tried to outdo the other by stating that his seamen’s guide or maritime atlas was ‘new’ and ‘expanded’ in comparison to his competing predecessors. However, it is doubtful if the publications deserved the label ‘new and expanded’.  Only at the end of the 17th century would Johannes van Keulen (1654-1715), a newcomer to the business of maritime cartography, change this situation with his Zee-atlas of water-werelt.

The maps in this copy of Zee-atlas ofte waterwereld by bookseller and engraver Pieter Goos (1615-1675) are not really that original. Almost without exception it concerns copies of the maps from the Zee-atlas ofte water-waereld which were published from 1659 onwards by publisher Hendrick Doncker, also from Amsterdam. In the second half of the 17th century Doncker’s maps were regarded as the most accurate and up-to-date maritime-cartographical  documents and that is why his competitors could not resist copying these maps. And also Goos gladly joined in. In his turn Goos was copied too by the way: the London map seller John Seller published a copied version of the Zee-atlas, a year after he had published an atlas with original maps by Goos. 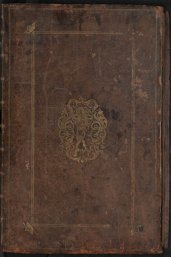 In 1666 the first edition of Goos’ Zee-atlas appeared containing 40 and sometimes 41 maps. Up to Goos’ death in 1675, this number would remain unaltered in later editions. Afterwards his widow published a few editions till she died in 1677, as did his son and successor Hendrik Goos between 1677 and 1680. In some cases a few maps were added to these later editions. This is also the case in this undated Utrecht copy. As said before, it contains  extra maps,  namely three  beautiful overview maps. The most recently added, the portolan map of Europe, mentions the year 1677. A portolan map is a sea chart with compass lines, intended for navigation at sea. We may assume that the owner or the publisher composed this atlas after that year, initially unbound. In the end all maps, including an introduction about the history of sailing and a description of the earth, were bound in an atlas binding which, looking at the crown stamps in the corners of the binding, was made in 1700 by the so-called ‘Double Drawer Handle Bindery’. This Amsterdam bindery was presumably active in the first half of the 18th century.

The index at the end of the Dutch introduction -  there are also editions with French, English and Spanish texts - mentions a total of forty ‘standard’ atlas maps. In relation with this index the maritime atlas has another commonly used folio map, namely the portolan map of the Gold Coast of Rio Volta to Cabo Lagoa near Africa. The three large overview maps are not mentioned in the index.

All maps in the maritime atlas, also the three added overview maps, are arranged in a logical order. After the world map and the European map the coasts of the Northern Netherlands up to the Baltic Sea are described and next the coasts of England up to the Mediterranean. No surprise, considering the major Dutch trade interests in these regions. After these European coasts the ‘journey’ continues in a straight line further along the coasts of Africa, Asia (including parts of Oceania), the northern border of Europe, the East coast of America, around Cape Horn and finally along the West Coast of America. In this way the atlas lists all coasts that were known at the time.

A part of the edition from the workshop of Pieter Goos’ widow was sold in the shop of the famous book binder and publisher Albert Magnus (1642-1689). Also this Utrecht copy comes from Magnus, judging by the piece of paper with his imprint glued to the title page: 't’Amsterdam, gedruckt by Albert Magnus, Ordinaris Drucker van 't Ed. Mog. Coll. ter Admiraliteyt' (In Amsterdam by Albert Magnus, printer of the Admiralty’). Below this piece of paper we find the original imprint of Pieter Goos’ widow. Of this publisher’s version no other examples are known in the world. The atlas works put on the market by Magnus have exceptionally beautiful illustrations and by this fact alone must  have been very precious  at the time.

One could gather from the rich hand-colouring that in any case the edtion of Goos’ Zee-atlas sold by Magnus was more appropriate for the coffee tables of the lovers of precious books than for daily use in the shipowners’ offices. This commercial focusing on several target groups also appears from the title on the frontispiece. There are two varieties: one says 'seer dienstig voor alle schippers en stuurlieden, als oock voor alle heeren en kooplieden' (at the service of all shipmasters and navigating officers as well as of all gentleman and merchants), the other variety, as seen in this luxuriously executed Utrecht copy, begins with the phrase: 'voor alle heeren en kooplieden' (for all gentlemen and merchants) and only then 'alle schippers en stuurlieden' (all shipmasters and navigating officers) follow. It may be clear: this copy of Goos’ Zee-atlas was meant for the living room of the well-to-do.

The major importance of this beautiful sea atlas not only lies in its beautiful hand-colouring. The supplement  of the three extra overview maps are at least as valuable. We have here very rare folio maps which were sold separately and were used to adorn walls. In particular: the portolan map of Europe, mentioned earlier, a copy of Willem Jansz. Blaeu’s map from 1621, with the imprint of Willem Jansz., Pieter and Joan Blaeu dated 1677. Furthermore it concerns the portolan map of the Atlantic Ocean from circa 1630, but then in a later state by Jacobus Robijn from 1674. Finally, the third map, is the portolan map of the Indian Ocean by Hendrick Doncker from circa 1664. Each one is a very valuable cartographical document, even more so because of its luxurious hand-colouring. Apart from some vulnerable spots in the corners of the folds, the maps are in a very good condition. This is so thanks to the fact that the maps were bound in an atlas and were therefore protected against, for instance, damage from light and smoke.

Where does the atlas come from?

This magnificent copy of  Goos’ Zee-atlas comes from the collection of Jacob Maurits Carel baron of Utenhove van Heemstede (1773-1836). Van Utenhove studied classical languages in Utrecht. Because he wanted to prove that it was possible to calculate ellipses, he also applied himself to mathematics and physics. In the period between 1797 and 1805 he was a regular visitor to the Utrecht Observatory. He also played a major part in determining the geographical length of the city of Utrecht. More than half of Van Utenhove’s library of 2000 volumes are on the subject of mathematics, physics and astronomy. Also classical authors, modern literature, philosophy and theology are well represented. In 1827 he had a catalogue printed of his collection. New acquisitions were noted down in an interleaved copy, which is currently kept in the University Library (MAG: C oct 452 Rariora). In 1837 his widow donated the library to the Utrecht University, on condition that the library as a whole would be kept as a separate part of the university collection.