The Enkhuizen navigating officer Lucas Jansz. Waghenaer delivered the world's very first original sea atlas with his Spieghel der zeevaerdt. He made this atlas partly based on his own observations as navigating officer and partly on the basis of his wide experience in navigating. The text is based on the traditional 16th-century seamen's guides, but the maps are totally new elements. This makes the book the first printed sea atlas in the world.

Around 1580, Waghenaer (circa 1533-1606) completed the 23 maps for the first part of the sea atlas. Both for the Dutch, French, German and English sailors and their Spanish and Portuguese colleagues it was an essential aid in navigating the European coasts. The folio format is an innovative feature. In those days the  oblong format was the standard. Waghenaer also brought smaller and more manageable formats to the market by publishing the seamen's guides Thresoor der zeevaert and Enchuyser zee-caert-boeck. 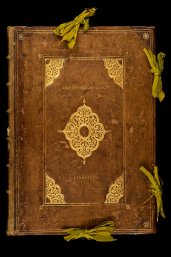 The copperplates for the maps were engraved by Joannes van Doetecum who transformed the relatively simple originals into the most beautiful maps of the period.

The beautiful and original bookbinding is made of calfskin over carton boards with gold stamping and ties of green silk.

The art of navigating

The Spieghel der zeevaerdt opens with a beautifully engraved title page and a dedication to Prince William I of Orange, followed by an introduction on the art of navigating. A description is given of how a sea map is made and how it should be used. The atlas also gives the routes and distances between many points along the coasts of Western Europe.

Gentlemen, about two years ago I published in print dedicated to the Prince of Orange Den Spieghel vande Zeevaert of which his princely Excellency made us understand that he accepted [the gift] with great pleasure and goodwill.

In the first part, the sea chart of Europe and the western part of Northern Africa is followed by 22 detailed maps of parts of the European coast: from the southern tip of the island of Texel to Spanish Cádiz. These are the coasts of the so-called western navigation. A year later, the second part was published, which contains the maps of the coasts northeast of Texel, i.e. the eastern navigation. 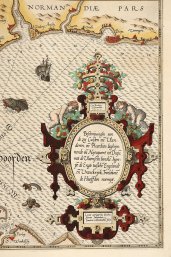 The sea charts in the Spieghel der zeevaerdt are included in the atlas according to a clear structure. Each depicted area is a unit consisting of four pages. On the first page  we each time find a description of sailing instructions for the coastal strip in question, which is depicted on the second and third page. The fourth page is blank, so the description of the next map starts neatly on the right page.

All maps are on a scale of circa 1:400.000, but the river mouths and ports are shown on a larger scale. Degrees of longitude and latitude are missing.

The maps are very clear, despite the coastline that has been simplified on detail points. They give the results of depth soundings, the course of the channels, the beacons and other markings such as church towers and houses that are visible from the sea. Near the seaports there is clustering of depth figures. This points to the use of the maps when entering and leaving the ports and rivers.

Each time Waghenaer combines a coastal map with a matching coastal profile. This was done before: the Portuguese put this principle to practice half a century earlier. But Waghenaer was the first one to apply this principle in a systematic way on maps with a uniform scale. At a single glance a seaman could now determine what kind of coast he was dealing with. On all maps we find sea monsters, and there are detailed drawings of ships. As a result, the maps are lively and functional at the same time

After 1585, some new editions of Van Waghenaer's sea atlas were published in several languages. initially the maps had Dutch titles and profile texts. At a later stage, the titels were engraved again and a Latin title was added. Also the profile texts were in two languages. In London in 1588 a piracy edition appeared, in other words a foreign copy, called the he Mariners Mirrour.

In addition to the first volume of the Spieghel der zeevaerdt described here, Utrecht University Library owns another copy of the complete 1585 edition (MAG: T fol 165 Rariora (LK)). Also this copy has been digitised and can be viewed online.

Dedicated to the Prince of Orange

Enkhuizen, a rich port at the time, was the first West-Frisian town to free itself from the Spanish rule. So it is not surprising that Waghenaer dedicated the first part of his life's work to the leader of the rebellion against the Spanish: William of Orange.

Shortly before his death on 10 July 1584 the Prince received the atlas in Delft. This is shown by the passage from the dedication to the States of Holland and West-Friesland in the second part of the atlas. It was published in Leiden in 1585 at Plantijn.

On both boards the dedication 'Illustrissimo . Principi . Aurasino’  is put in. This also shows that this must have been the presentation copy for Prince William of Orange.

Probably this copy was bound in Leiden by Lodewijk Elzevier, who worked as a binder for Plantijn in that period. It may be assumed that the book was auctioned in 1585, together with the rest of the Delft library of William of Orange, because it  does not occur in the catalogues of the book collection of the Oranje-Nassaus that were compiled in 1686 and 1749. We do not have a clue of the whereabouts of the book between 1585 and 1830 when it came in the possession of Utrecht University Library.