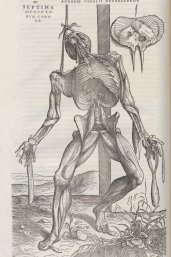 In order to write 'De humani corporis fabrica. Libri septem', or The seven books about the build of the human body, the Flemish physician Andries van Wesel carried out dissections of human bodies himself. This was unprecedented in his day and age. In this voluminous book counting over 600 pages, published in 1543, the human body is shown in the smallest detail. The book is regarded as the first anatomical standard work for modern medicine.

In the book extensive descriptions alternate with accurately illustrated body parts. Skeletons and cadavers are depicted against a backdrop of charming, Italian-style landscapes. The book contains 25 full-page illustrations and numerous smaller illustrations, showing every human organ.

All illustrations are prints from woodcuts. It is likely that the woodworkers were present when Vesalius carried out the dissection of the bodies. The woodcuts were designed in Padua under supervision of the author and next sent to Basel where printer Johannes Oporinus printed them in empty spots in the book. The text of the book was first typeset and then printed. The places in the book where the illustrations were to be put, were left empty. Next the cut-out illustrations on the woodblocks were rubbed with ink and printed on the paper. Besides Vesalius himself and Jan Steven van Calcar, who belonged to the school of Titiaan, several other anonymous artists worked on the designs.

Many of Vesalius' findings clashed with the traditional medical school, based on the Late Antique theories by Claudius Galenus (130-ca 201). This Greek physician had probably never seen the insides of a human body. Both in medical and theological circles, Vesalius' book caused heated debate. Vesalius was accused of vivisection and blasphemy. To escape the inquisition, he ceased his anatomy lessons at the University of Padua where he was a professor. He then became the court physician of Charles the Fifth and Philip the Second whom he followed to Madrid.

Despite the resistance the work caused with followers of the traditional medical school, Vesalius' work received immediate popularity. This remained the case far into the 18th century, judging by the 1725 reprint, edited by Herman Boerhaave and Bernard Albinus.

For the less wealthy the first abridged edition of De humani corporis fabrica was published at Oporinus in 1543, in which a part of the same woodblocks were used to make prints. This Epitome appeared in fourteen separate broadsheets, so the medical student or the (future) artist could hang them on the wall, making it easier to study the human anatomy.

The sheets could also be cut out and glued to cardboard pieces. By putting one on top of the other, it was possible to practise with the several layers and organs of the human body.

The copy in the Utrecht University Library (MAG: M fol 92 Lk (Rariora)) only misses one and a half sheet and is bound in a modern binding of marbled paper on cardboard covers. Between 1608 and 1670 the De humani corporis fabrica and the Epitome were acquired by the library or donated to the library.

From an early age, Vesalius (born in Brussels, 1515 - died on Zakynthos in 1564) collected bones on the Brussels gallows hil and took them home for study. In later life he is said to have wandered around graveyards in Paris looking for bodies and he was supposedly involved in a grave theft in Leuven. It is not clear if there is any truth in these stories, but they keep turning back in several sources. Andreas Vesalius' father was court pharmacist of Maximilan of Austria and Charles the Fifth. Vesalius was a student of anatomy in Leuven, Montpellier and Paris. He was 28 years of age when De humani corporis fabrica. Libri septem was published.