The world atlas by Ortelius 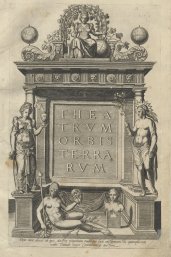 The Brabant map maker and geographer Abraham Ortelius (1527-1598) would have gained only a small position within the cartographic discipline, if he didn’t conceive the pioneer’s idea to compose the best actual maps in a uniform format in a book. His modern world atlas Theatrum orbis terrarum, of which the first edition appeared in 1570, was compiled and printed in Antwerp, at the time the very heart of the worldwide economy, but also of commercial cartography. Ortelius’s atlas became a great success, setting the trend for a rich trade in maps and atlases for the centuries to come.

Origin of the atlas

Various theories exist about the origin of the world atlas, but there can be no question that with the Theatrum orbis terrarum a new phenomenon was introduced. Several precursors or ‘almost-atlases’ were in existence long before the publication of Ortelius’s Theatrum orbis terrarum. For instance Ptolemy’s Geographia, with its 28 historical maps of uniform size, was mainly of antiquarian and historical interest. The addition of individual ‘Tabulae modernae’ gradually transformed it into a geographic source work. Nevertheless it never entirely outgrew its antiquarian structure.

Closer to the atlas conception were the collections of Italian maps, assembled to order by publishers from Rome and Venetia between 1550 and 1577. The compositions of these map sellers, working to orders from their customers, cannot be described as atlases in our sense of the word as they were composed of maps of various sizes, unaccompanied by text. The gradual modification of Ptolemy's Geographia to increasingly resemble an atlas and the development of the composite atlas in the third quarter of the sixteenth century indicate that there was a market and a demand for such publications. It meant the prelude for the development of a real modern atlas, with uniform maps, tight editing and accompanying texts.

Under the influence of many discoveries and expeditions, the market for voluminous map works began to grow from the mid-16th century. There was, for example, Sebastian Münster's Cosmographia (first printed in Basel in 1544, published in Latin, German, French, and Italian) with descriptions of the countries of the world and over fifty maps and seventy town plans. The inspiration of Gerard Mercator, who was himself preparing an atlas and was in correspondence with Ortelius, must also have contributed to the outcome. The need for up-to-date, adequate maps had also been expressed by the merchants of Antwerp.

Ortelius's originality lay not only in his integration of map and text into a single homologous unit but also in his systematic updating and enlarging in the form of supplements. Thus, the contents of the atlas increased from 53 maps in 1570 to 119 maps in 1598, the year of Ortelius's death. Until 1641 over thirty editions would be published with a maximum of 166 maps, in Latin, Dutch, German, French, Spanish, English, and Italian languages. It is estimated that more than 8,000 copies left the presses; a great commercial success!
The Theatrum Orbis Terrarum differed from the Italian composite atlases: it was printed as one edition, comprising a specific number in the same series, and it had a uniform format.

In producing his own maps Ortelius made use of the best contemporary cartographic sources available to him. These sources were copied or reduced by collaborators, among others the famous engraver Frans Hogenberg (who became also responsible for the first town atlas Civitates orbis terrarum some years later). Taken into account the time necessary for preparing, selecting, and engraving the 53 maps of the first edition, Ortelius must have started the work on his world atlas around 1565. Thanks to Ortelius's capable judgement, the reshaped, often awkwardly sized prototypes were transformed into well designed, elegant, and easily read maps. 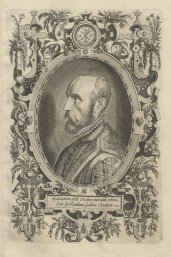 This digitized copy of the Utrecht University Library is from 1579 and represents the second impression of that year’s edition. The text is in Latin. The ‘Catalogus auctorum’ – the list of map sources Ortelius used for his atlas – now mentions 127 names and titles instead of 120 in the first impression of 1579. Furthermore some minor, mainly textual, differences can be discerned. Besides, the edition of 1579 contained for the first time the portrait of Ortelius, engravd by Philip Galle. It is a striking picture of the ‘homo universalis’ in a somewhat aristocratic pose.

To conclude, Ortelius’ Theatrum orbis terrarum not only became a commercial success, but it also reached a scientifically high quality status. Owners of the atlas were capable now to form a coherent image of the region, country, and continent they were living in. In this way the Theatrum orbis terrarum heavily contributed to the European geographic culture of especially the fourth quarter of the 16th century.