Dutch splendour in the 17th century

Nothing gives a more beautiful and magnificent picture of the Dutch Golden Age than the more than 200 plans of towns of the Northern and Southern Netherlands in the Toonneel der Steden (‘Theatre of towns’) by Joan Blaeu. From 1649 onwards, a year after the end of the Eighty Years’ War, this Amsterdam map maker and publisher presented the Dutch towns, whether they were liberated or not, in all their pride. Blaeu’s town plans are so characteristic and have so often been reproduced that they have become a part of our collective memory. But let us not forget the texts…!

In the days of Blaeu, the Dutch Republic passed through its Golden Age and Amsterdam was the ever expanding centre of international trade, overseas expansion and wealth. In such a city all conditions were present to start a flourishing publishing house for maps and atlases: international contacts, financial means and a sales market. Willem Jansz. Blaeu (1571-1638) capitalized on these circumstances, possessing know-how and an excellent business instinct. After an apprenticeship with the famous Danish astronomer Tycho Brahe, he founded his own printing and publishing firm in Amsterdam. From his first printed maps (dating from 1604) he attracted attention by the quality of his maps and his innovations. Blaeu did not travel to survey and make measurements. He designed his maps on the basis of already existing maps supplemented with knowledge he obtained from travel accounts and conversations with sailors. 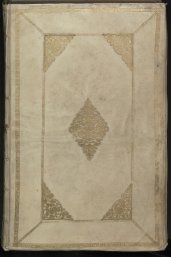 After the death of Willem Jansz. Blaeu in 1638, his son Joan (ca. 1598/99-1673) took over the company. He brought the family business to an even greater prosperity. Building on the legacy of his father, Joan tried to publish a true cosmography, a complete description of the then known heaven, earth and seas. This resulted in the publication of the famous Atlas Maior. From 1662 onwards, this multi-volume world atlas appeared in several editions and languages and was the pinnacle of the Dutch atlas production. Also the famous Toonneel der Steden van de […] Nederlanden, the town atlas which Blaeu published in two volumes in 1652, was part of his plan for an enormous cosmography. The look of the volumes of this Utrecht copy of the Atlas Maior and the Toonneel der Steden van de […] Nederlanden is identical. In this way both publications undoubtedly form a uniform whole.

‘My intention, dear reader’, starts Blaeu his introduction to the town atlas, ‘is to build a theatre in which to display the pictures and descriptions of the towns of the earth. I believe that you will find it to be an important work, of more than common labour, immeasurable costs and hardly to be achieved in one lifetime. Yet I will continue, and with unflagging zeal, and to the best of my ability, not only with this task but also with our atlas (of which already four volumes have been published and of which the fifth is in press) which I will decorate and multiply till the end of my years which are dedicated to the common good of all.’ So in his introduction Blaeu mentions his world atlas which then as Theatrum orbis terrarum consisted of five volumes. It stands for the great cosmographic dream which he had in mind: one enormous multi-volume atlas in which a complete depiction of heaven and earth would be given.

First volumes devoted to the Netherlands

In the introduction Blaeu next discusses the content of his intentioned town atlas. The first realized volumes are devoted to the Netherlands, his home country, because he knows this country the best and because ‘according to the laws of nature’ he loves it the most. In addition the Netherlands, according to Blaeu, had been the ‘only stage of the most courageous actions of the whole world’. Blaeu refers to the Eighty Years’ War that ended with the Peace of Westphalia in 1648. And Blaeu is happy with that outcome.: ‘How happy are we to live in these times!’

The second volume, which Blaeu says he is working on in his introduction, will be devoted to Italy. Here he had spent a part of his childhood and that is why the towns of this country directly follow those of his home country. In short, personal preferences were the most important motives for the final composition of the town atlas!

Blaeu’s plans for the town atlas looked like this:

Blaeu says about the maps of the British towns that ‘already many are done’. Yet not of a single town in England and Scotland a Blaeu map is known! The same goes for Germany, but that was a well-considered decision by the Amsterdam publisher. The Swiss engraver Matthäus Merian who worked in Frankfurt had already mapped these towns. And besides, Blaeu could finish his town and country atlas sooner. Still, the remark about Merian raises questions: the maps in his Topographia are totally different from Blaeu’s maps. Also strange is the fact that the Civitates orbis terrarum is ignored, the atlas by Braun en Hogenberg containing all important towns in the world. This was probably an intentioned move of Blaeu because his rival Johannes Janssonius was busy at the time buying all the copperplates of the Civitates.

Relation with the fight for independence 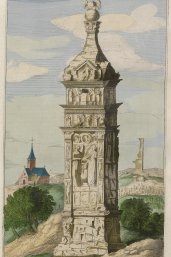 Shortly afterwards, several town plans were copied by his great rival, Janssonius. The similarities between some plans in the Toonneel der steden and those in Janssonius’ Theatrum urbium celebriorum totius Belgii sive Germaniae Inferioris are striking, although the latter often added town profiles on the top of the map. Some later editions of the town atlas are known, published after the great fire in Blaeu’s print shop in 1672. They contain extra plans by the Amsterdam publishers Visscher (1673/82) and De Wit (ca. 1700).

The sequel: the town atlas of Italy

After the publication of the town atlas of the Netherlands, what became of Blaeu’s plans for a multi-volume atlas of towns in the world? Only in the sixties of the 17th century did the town atlas of Italy gain shape. Pieter (1637-1706), the son of Joan Blaeu, was sent to Italy in 1660, possibly to collect source material for that atlas. Although the original plan departed from two volumes, the plans changed. The town atlas of Italy had to come close to the size of the complete description of the earth in the Atlas maior, the mega atlas consisting of nine to eleven volumes that Blaeu published from 1662 onwards.
In 1663 he wanted to show the public that he was really working on the giant publication by a kind of prepublication of an atlas of Italian towns in three parts. In the introduction Blaeu says he wants to publish two volumes consisting of five ‘books’ each. The first part, Civitates Italiæ was to treat the towns of Italy. The second part, Admiranda Urbis Romæ, the monuments of the town of Rome. In fact he only succeeded in publishing three parts in 1663: the towns of the Ecclesiastical state (volume 1, part 1), an incomplete part with the towns of Naples and Sicily and a part with the circuses and theatres of Rome (volume 2, part 1.)

The final result of the cosmography

With two volumes of the Dutch town atlas and three parts of the Italian one, an enormous achievement as it is, the plan of the multi-volume atlas of towns in the world came to a stop. Blaeu was also unable to finish the remaining piece of the cosmography: of the four intended volumes actually ‘only’ one and a half volume were finished: the Atlas maior as a complete world atlas and the town atlas of the Netherlands and of Italy as an unfinished overview of world towns.

After this explanation of the complex publication history of the town atlas it is time to look at the maps themselves. The volume with the towns of the Dutch Republic contains approximately 130 sheets with maps, and the volume with the towns in the Southern Netherlands only about a hundred. Some pages include more small maps, but the greater part consists of beautifully engraved maps in folio. Although Blaeu used some copperplates of previous publishers, his maps are for the most part made in his own workshop. So most towns were represented on new copperplates, based on the examples sent by city councils. If an up-to-date map was not available, Blaeu asked for a revised version of an older map.

In spite of the sometimes frequent letters to the city councils, the town atlas of Blaeu sometimes shows gross mistakes. For instance the small town of Goedereede seems to be based on pure fantasy. Yet the maps by Blaeu are characterized by clear engravings, a good cartographic representation and a uniform and aesthetic appearance. All buildings in the town are represented upright, 3-D as it were, and offer a good impression of the town in question. The finishing touch are the beautifully decorated cartouches and decorations. The colouring is done by hand.
From the very beginning Blaeu’s maps were enormously popular. As a result, his name became a kind of quality mark. And because the surface area of most towns remained unchanged in the 18th century the maps remained in use for a long time. There are even clues that several of Blaeu’s maps were sold by other publishers as ‘actual map material’ until far in the 19th century!

The texts in the atlas

The accompanying texts Blaeu included have almost completely been ignored in scientific research. Yet these texts are inextricably bound up with the town atlas in general and the maps in particular. In the description of a town, the focus is mainly on the geographical situation, the history, the most important buildings and the prevailing norms and values. For instance, Zutphen is known for its air that is ‘healthy and pleasant both within and outside its walls’. Blaeu based his texts on several sources, including publications by historians and contributions of local magistrates.

The maps in Blaeu’s Toonneel der steden are the peak of the Dutch production of printed town plans in the 17th century. They played an important role in the image of the Dutch Republic as a country bound for success. Nowadays we can marvel at the beautiful depiction of the towns and at the accompanying texts. And all for free, because this copy belonging to Utrecht University Library is completely digitally available!

Digitizing the atlases was possible thanks to a generous grant of the K.F. Hein Fonds.