With nearly half a billion speakers, Hindustani (or Hindi-Urdu) is one of the most spoken languages in the world. The most densely concentrated group of Hindustani speakers can be found in northern India and Pakistan in an area which was the power base for the Mughal Empire from the mid-16th to the mid-19th century when Hindustani was the lingua franca.

Hindustani grammar was first recorded by Joan Josua Ketelaar and his notes have been preserved in three manuscripts. The most complete manuscript is kept at Utrecht University Library. It is partly thanks to his recording of Hindustani grammar that Ketelaar is famous among researchers today – not bad going for someone who was accused of attempted murder and theft.

Kettler/Ketelaar: from criminal to merchant 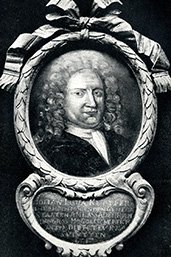 Joan Josua Kettler was born in 1659 in Elbing near Danzig (now Gdańsk) in German-speaking Poland. His father was a bookbinder and the intention was for the young Joan to follow in his father’s footsteps. However, in 1680 Joan was accused of stealing from the master with whom he was serving his apprenticeship. Joan tried to save his reputation by poisoning his master (and, unintentionally, his guest) with arsenic in their beer, but a doctor was able to save them and Joan was forced to flee to Danzig, where he took up residence with another bookbinder. However, within a few days he stole this bookbinder’s money as well and fled to Stockholm.

In 1682, Joan registered with the Dutch East India Company in Amsterdam under the name Ketelaar. A year later, he had made his way via Batavia to Surat, a major port to the north of Mumbai (formerly Bombay), where he made a career for himself. In 1687, he rose from clerk to assistant and in 1696 he was promoted to accountant. Ketelaar later became deputy head of the trading post in Ahmadabad, before becoming head of the trading post in Agra in 1700. A year later, aged 42, he became a junior merchant. In 1706, Ketelaar led a successful mission to purchase coffee in Mocha in Arabia. On the return journey to Batavia he was able to escape after a fierce encounter with a French pirate, and he was rewarded with a promotion to merchant. In Batavia he became the key figure in Suum Cuique, a kind of literary society whose members’ would sometimes indulge themselves by writing odes to one another (Bostoen 1992).

The Mughal Emperor and the Persian court

In 1708, Ketelaar was again sent to Mocha, this time as a senior merchant. The documents explicitly state that he was chosen partly because of his experience and familiarity with the Moorish language and customs. He is also referred to as ‘linguistic’. Following the death of Cornelis Besuyen, chief of the key trading post in Surat, Ketelaar was sent on an embassy to the Mughal emperor (Great Mughal) Bahadur Shah. He set out for Lahore (Pakistan) with ten elephants and 26 horses carrying a range of valuable gifts, choosing a route through Udaipur where his arrival was painted by a local artist (Lunsingh Scheurleer, 1989).

Ketelaar reached the court of Bahadur Shah after a journey of more than ten months. However, the emperor passed away before the negotiations were fully underway and a war broke out immediately between his sons about who would succeed their father. In 1712, the Dutch ambassador accompanied the winner, Jahandar Shah, to Delhi, where Ketelaar, following lengthy negotiations, eventually obtained the coveted letters of favour and trading privileges. After a brutal, highly dangerous and costly trek across India, Ketelaar arrived back at his trading post, where he learned that Jahandar Shah had been beaten in battle by his nephew in January 1713 and strangled shortly afterwards. As a result, all of the privileges obtained by Ketelaar were now worthless. Although Ketelaar was blamed for the ultimate failure of his embassy, he was still sent to the Persian court in Isfahan (central Iran) in 1715. During his stay there, Ketelaar fell ill and he eventually died in the port of Bandar-Abbas (Iran) while attempting the return journey in 1718. He was also buried there.

The search for the earliest Hindustani grammar

Ketelaar’s career from 1682 onwards is well documented in the Dutch East India Company archives and some of these documents have been published (see Vogel 1937, in particular). His last journey was recorded by his companion Johann Gotlieb Worms (Weisen 1737).

For a long time, Ketelaar’s linguistic work was only known through David Millius (1692-1756), who was Professor of Theology and Oriental Languages at Utrecht University. While there is no reference to Ketelaar’s work in the first edition of Millius' Dissertationes selectae, which was published in 1724, his work is mentioned in the second, expanded edition (Leiden 1743). In the introduction to that edition, Millius explains that the additional section of the book entitled Miscellanea Orientalia is derived as regards Hindustani grammar from the work of Joannes Josua Ketelaer, which he is publishing for the first time.

He states that Ketelaar was the ambassador to the court of the Mughal emperor and a moderator in Surat and that he committed his Miscellanea de lingua Hindustanica, idiomate Belgico ('Collections on the Hindustani language, in Belgian (Dutch) idiom') to paper during his stay in Agra. Millius includes a Latin version of Ketelaar’s work – although in a different order – on p.455-88.

Until 1895, Millius’ publication was largely unknown among orientalists. It was actually thought that the first record of Hindustani grammar was written in 1745 by Benjamin Schultz (who mentions Ketelaar in his work, incidentally). In 1895, Sir George Grierson first brought Millius’ work to the attention of the academic world, having been encouraged to do so by a lecture given by Emilio Teza.

The manuscript is divided into 53 chapters, but the title of the last chapter, ‘deductie van caren en ponden’, is replaced in the text by the Ten Commandments, the twelve Christian articles of faith and the Lord’s Prayer. Several of the pages are damaged, illegible or hard to read. The manuscript was copied by Isaac van der Hoeven of Lucknow (India), apparently for personal use.

What happened to the manuscript afterwards is unknown. In 1822, it was purchased by King William I at an auction in London. Tej Bhatia (1987, 23-45, with four reproductions from the manuscript) considers this manuscript to be the earliest recording of Hindustani grammar. A digital version of the microfilm of the manuscript is also available online.

On the title page it is stated in Latin that the manuscript contains the text of the acclaimed scholar Joannes Josua Ketelaar, Dutch East India Company ambassador to the Mughal emperor and director in Surat, who had written the manuscript during his stay in Agra. The copy was finished in Surat in January 1714. It is signed with the initials GB, whom researcher Anna Pytlowany (Amsterdam University) has identified as Gideon Boudaan, chief of the trading post in Deshima (Japan) from 1715 to 1716. Boudaan came from a family in Zeeland, of which various members were active in the Dutch East India Company. In 1717 he was back in the Netherlands (he witnessed a notarial document in Overschie, near Rotterdam). In 1728 he bought the Leeuwenburg in Driebergen en thus became lord of the lordship of Hardenbroek. He also became a member of the Utrecht city council. In 1747, a few years before Boudaan's death, his wife Isabella and his only child Anna Maria Margareta sold the Leeuwenburg to Matthijs Swemmelaar. The Paris manuscript comes from the collection of Dutch art collector Frits Lugt (1884-1970).

Ms. 1478 was first cited by Stuart McGregor in 2001 (see also Gautam & Schokker 2008). In 2011, it was digitised on the initiative of Anna Pytlowany. She also organised research into the manuscript in the National Archives in The Hague, in which QHI (Quantitative Hyperspectral Imaging) was used to make the crossed-out names visible once again. Why the names were crossed out, and by whom, is not known.

Even though the name of a copyist is not included, it is unclear whether Ketelaar himself wrote the manuscript, because it is not possible to compare it to his handwriting during his stay in India. The inclusion of the twelve-line poem Ad momum (1v) in Dutch is notable because it fits in well with Ketelaar’s role in the literary society Suum Cuique.

The manuscript is divided into 52 chapters and the page numbering is sometimes incorrect. Some small details of the manuscript differ from the other two, but generally speaking it is the most complete of the three, and will have to be the starting point for a critical edition of all three copies of the text. It probably originates from the library of Adriaan Reeland (1676-1718), who was professor of Oriental Languages at Utrecht University.

Anna Pytlowany brings Ms. 1478 to the National Archives, The Hague, for QHI analysis, on 17 May 2011. During that time the manuscript was insured against loss or damage.

Production of the manuscripts

The information about Ketelaar given by Millius in his Miscellanea Orientalia, appears only in the Paris manuscript, including the information that Ketelaar wrote his grammar while he was staying in Agra. A short comparison between Millius' work and the Paris manuscript by Anna Pytlowany established clearly that Millius had used this manuscript. His Miscellanea Orientalia was published in 1743, when Boudaan was residing in the Leeuwenburg, and it seems obvious that Millius, regarding his interests, sought him out and thus acquired a copy of Ketelaars Hindustani grammar.

So, Ketelaars grammar was written in Agra, and we know that Ketelaar was there in 1696 and 1697, in the company of Isaac van der Hoeven, who copied the Hague manuscript in Lucknow in 1698. Karel Bostoen (1992, 120 note 27) therefore concludes that it was evidently then that Ketelaar’s Urdu grammar was written. It focuses on 'Hindustan ki boli' as spoken in de area of Agra, Delhi and Lahore by the elite (Gautam & Schokker 2008). The differences between the three manuscripts can be explained by the fact that Ketelaar reworked his grammar. As a result, minor additions and changes can be found in successive copies. However, Isaac van der Hoeven and Gideon Boudaan also left things out that they did not consider important, such as the poem, which is only found in Ms. 1478.

In the preface Ad lectorum benevolum, Ketelaar refers to the educational and practical value of his work. The fact that three handwritten copies were produced and an edition was published demonstrates that he achieved this purpose. While Ketelaar’s knowledge of Hindustani and Persian leaves something to be desired in certain respects, this does not detract from the great value of his work. A lot of research work still has to be done, however, before the earliest Hindustani grammar divulges all its secrets.