A beastly book of hours 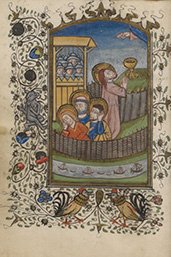 A clattering stork here, a mother hen with chicks there. Utrecht, University Library, Ms. 5 J 27, a book of hours from the third quarter of the 15th century, is full of animals in the margins of the miniatures. The Utrecht illuminator Antonis Rogiersz. Uten Broec (?-1468/69) may have been inspired by famous examples, such as the book of hours of Catharine of Cleves (New York, Morgan Library, M. 917 and M. 945), illuminated by the Master of Catharine of Cleves. But he also had an eye for the symbolic meaning of the animals he painted.

Ms. 5 J 27 is a Middle Dutch book of hours. Books of hours were small, portable prayer books for laymen, a counterpart to the much more extensive breviaries for the clergy. The core of a book of hours consists of a calendar of saints, the Hours of the Virgin, the Penitential Psalms with the Litany of the Saints and the Office of the Dead. The Hours of the Virgin are a collection of psalms, hymns, lectures and prayers. They are arranged according to the hours of the day: at midnight the ‘day’ starts with the Matins, at daybreak the Dawn Prayers or Lauds are said, during the day the Prime, Terce, Sext and None. The day closes with the Vespers and the Night Prayer, the Compline. In the northern Netherlands, influenced by the Modern Devotion, most books of hours were in the vernacular. In the southern Netherlands Latin was more usual. Ms. 5 J 27 contains a calendar of saints for the diocese of Utrecht, the Hours of the Virgin, seven Penitentiary Psalms, the Office of the Dead and the Litany of the Saints and, contrary to what is usual, the Office of the seven hours of the Passion of Christ. The calendar of saints focusses on Utrecht which is shown by the fact that the names of the saints important to the diocese of Utrecht are written in red ink, such as Saint Martinus and Saint Willibrord in November.

Books of hours for the anonymous market

Initially, books of hours were personalized books for the nobility, but in the 15th century also the moneyed classes could afford them. This was because the production of manuscripts became cheaper and the vernacular came into use (Van Bergen 2009, 81-82). For a large part making books had become the job of craftsmen in the city instead of monks in cloisters. These craftsmen each specialized in a small part of the production process. In addition, they used techniques which enabled them to work faster. For instance, an illuminator made miniatures on loose leaves, so that he did not have to wait for the copyist to finish the manuscript. In this way the illuminator could even build up a stock of illustrations. Besides, illuminators often made use of models and patterns for both the miniatures and the border decorations. But the techniques leading to a less expensive book production, also resulted in the fact that patrons had less to say on the design. That is why the books of hours for citizens can usually be recognized by the absence of colophons, coats of arms or other signs of ownership such as personalized prayers.

An anonymous book of hours 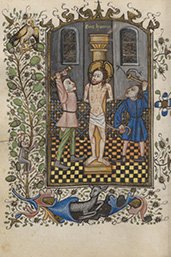 Most illuminators worked both for prestigious commissioners and for the ‘anonymous’ market. Nothing is known about the commissioner(s) or owners of Ms. 5 J 27. Clues such as a colophon or coat of arms are missing. Possibly it was made for the ‘anonymous market’: because the miniatures are inserted on loose leaves. Probably this manuscript belonged to the more expensive manuscripts. Not only does Ms. 5 J 27 have decorated initials at the beginning of each core text (the Hours of the Virgin, the Penitentiary Psalms and so on) as is usual in Middle Dutch books of hours, but also a full page miniature at each hour in the Hours of the Virgin. This more elaborate method of decoration was especially used in more expensive books of hours (Broekhuijsen 1997, 27-29).

We cannot say with absolute certainty that Antonis Uten Broec was the illuminator of the manuscript. Catalogues from the 1980s attributed the book of hours to one of the masters or a follower of the Master of the Boston City of God (Van der Horst 1989, 17; Defoer 1989, 200). Klaas van der Hoek has identified this master as Antonis Uten Broec (2004) based on attributed work and archive records. Antonis who was born in Utrecht worked in the southern Netherlands until circa 1460. After that he worked in Utrecht till his death (1468/69). Both the Boston City of God, made in 1466 for the Canons Regular in Utrecht, and a book of hours dating back to around 1470 (The Hague, Royal Library, Ms. 131 G 4) indicate that Antonis had returned to Utrecht at the end of his life. Initially Van der Horst dated Ms. 5 J 27 around 1450 (circa 1440-1460) (1989, 17) which does not fit in with the period in which Antonis was active as illuminator. Based on the penwork this date must be set to a later period. The Utrecht dragons are part of the ‘crown and dragon style’ which occurred between 1460 and 1468 (Gerritsen-Geywitz 2009, 23). This is exactly the period of which Van der Hoek thinks Antonis worked in Utrecht. So Ms. 5 J 27 could have been made by Antonis himself, or by a follower as suspected in the catalogues.

Cycle of Passion and cycle of Infancy 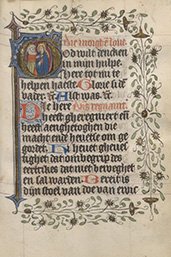 Each core text of Ms. 5 J 27 opens with an initial which includes a picture (a historiated initial) and a full page miniature. Only at the beginning of the part with the various prayers there is no miniature. In the Hours of the Virgin even each hour has its own miniature with scenes from the cycle of Passion: the last days of Christ. Unfortunately two are missing: the Crucifixion and the Arrest of Christ. These have been cut from the manuscript as can still be seen on f. 29r, where there is a cut is in the vellum. The historiated initials in the Hours of the Virgin hours show the cycle of Infancy, scenes from Christ’s (early) childhood. The cycle of Infancy, starting with the Annunciation to Mary, is thematically related to the Hours of the Virgin.

Animals in the margins

The margins of the several openings are decorated with fine foliate tendrils and gilded leaves. Around the full page miniatures we find animals as well, standing or sitting in the tendrils. Below the scene of Christ on the Mount of Olives (f. 15v) we find two cocks for instance, and next to the Bearing of the Cross (f. 56v) there is a mother hen with chicks and a clattering stork. Not all animals are equally recognizable. For instance there are a number of birds which one can’t make heads or tails of. Other animals on the other hand, such as the great tit (Parus major) next to the Office of the Dead (f. 119v), are easily recognizable. These animals enrich the decorations in the manuscript and give it a luxurious appearance, but there may be more to it than that.

Generally, medieval manuscripts did not have page numbers. The foliation as we use nowadays was usually added at a later stage. If the medieval owner wanted to look up a certain part in his manuscript he had no table of contents at his disposal. Miniatures, initials and penwork helped in finding the right text fragments. The more striking the illustration, the better, because in that way it was easier to remember that the Office of the Dead for instance started at the great tits. For when browsing through the manuscript, the margins first catch the eye (Rudy 2008, 220). It is not unthinkable that the animals, as additions to the miniatures, helped in tracing back the core texts (Marrow 2009, 28-29).

Examples from other manuscripts

The animals in Ms. 5 J 27 are by no means unique, they occur in many other manuscripts. Especially fighting cocks, great tits and blue tits were popular in 14th and 15th manuscripts from England, France and the Netherlands (Randall 1966). Also in the book of hours of Catharine of Cleves (ca. 1430-1442), an important (Utrecht?) manuscript from the northern Netherlands, we find several animals which are also depicted in Ms. 5 J 27, for instance the clattering stork and the mother hen with chicks. In another book of hours from around 1460 (KB 131 G 4), also attributed to Antonis Uten Broec, the full border illustration from a page of Catherine’s book of hours is copied (Defoer 1989, 200). These similar illustrations may suggest that one had knowledge of the book of hours of Catherine of Cleves in the circles of Antonis Uten Broec. Or it could be that all books of hours from the vicinity of Utrecht made use of the same examples.

It is striking that a number of animals fit in very well with the miniatures they accompany. For instance the cock is related to the apostle Peter who denied Jesus three times before the cock crows in Matthew 26:34, 75. That this would happen was predicted by Jesus during the Last Supper. Between the Last Supper and the crowing of the cock Jesus takes three disciples, including Peter, to the Mountain of Olives. So the cocks next to this miniature fit in with the depicted Peter and predict his denial of Christ. 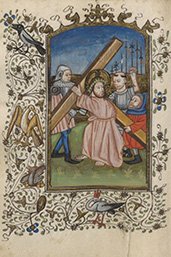 Next to the Bearing of the Cross is a hooded crow. This bird was not indigenous to Western Europe, but was sometimes a winter visitor. In the 15th century Dutch artists often used him to replace the magpie, but attributed the same meaning to the bird: the harbinger of the death and resurrection of Christ. In this way the hooded crow is a perfect match with the Bearing of the Cross, which precedes the Crucifixion and Resurrection (Dittrich 2005, 320-321). The owl, the monkey and the lamb standing next to the flogging of Christ (f. 50v) echo this miniature. The owl and the monkey were known as negative animals, whereas the lamb is often the symbol of Christ (Dittrich 2005, resp. 108-110, 23 en 427-428).

Whether all animals were chosen for their symbolic meanings is hard to say, because some animals cannot be identified yet. More iconographic research, especially into examples from the northern Netherlands, could shed more light on this question. Anyway, in the Middle Ages animals bore several, and sometimes contradictory, symbolic meanings to be explained in many ways. A symbolic connection between miniatures and animals is never far away, but maybe that is exactly the strength of this kind of margin illustrations. There are still many riddles in Ms. 5 J 27 waiting to be solved.