Ms. 684 is one of the 37 bound manuscripts once kept in the library of Utrecht’s St. Paul’s Abbey, now preserved in the University Library of Utrecht. It’s a large book with a heavy, wooden cover, leather-clad with iron fittings. Quite an impressive sight to behold. It contains the Lilium medicinae by Bernard de Gordon, copied somewhere around the turn of the fifteenth century. These and similar texts were frequently used by both students and medics alike. We will explore whether Ms. 684 was used as a study guide or a medical work of reference.

The Lilium medicinae was an important work that exerted great influence on medieval medical science. Bernard de Gordon (Bernardus de Gordonio) wrote it in 1303. Within a few years after its completion, it appears to have circulated so far beyond Bernard’s workplace in Montpellier that Jan Yperman drew references from it for his Cyrurgie (Huizenga 2003, 190). Bernard de Gordon wished to offer a general overview of the customs, uses and best practices of medicine. The Lilium medicinae remained popular, by 1501 no less than seven editions had been published. 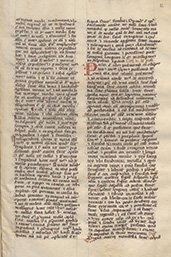 The book features iron supports on the cover, called bosses. These bosses, which were presumably attached shortly or immediately after production, protect the leather cover from wear when stored horizontally, as was the custom. The leather does not only show impressions of now lost bosses in the corners of both the front and the back covers, two additional bosses are still affixed vertically along the center of a diamond-shaped drypoint decoration on the front cover. Their function is still unclear.

Several parts of the book are marked with small protruding strips of parchment, attached to the edge of a leaf; in other words, the manuscript contains tabs. Wherever a tab is affixed, the leaf contains a table of contents. Titles of text sections in the rest of the manuscript have been written in red ink, facilitating quick searching through the book to find what you need. This is convenient design for a work of reference. Tabs occur in other manuscripts and early prints, but research in the use and history of this feature in medieval and early modern book design is still in its infancy.

Although many works of reference contain student’s notes in the margins, Ms. 684 contains remarkably few marginalia. What little there is, is not as elaborate as one would expect from a medieval study guide. These study guides were usually handled in separate, individual quires, as these were lighter and easier to carry with you. Heavy books like Ms. 684 were not regularly found on student’s desks. Admittedly, it may be possible that the heavy cover was added at a later time, but one would expect more traces of use by students.

We would argue that Ms. 684 was used by a practitioner of medicine as a work of reference. The cover appears to be of medieval origin, it may even be the original cover. The flyleaf that was glued to the wooden cover and through which the iron bosses were affixed, bears the name of a former owner: master Jacobus Jutfaecs Alemberch. He’s related to a doctor, Simon Jacob de Alemberch, who is named in a marriage certificate from the city of Utrecht, dated in 1446 (Mattaeus 1738, II, 315), as well as the student Simon Alemberch from Utrecht who studied medicine and graduated from Bologna in 1493. According to Peter Gumbert, the writing on the flyleaf is from the sixteenth century and as his name would suggest, he at one point lived in Jutphaas (now Nieuwegein, south of Utrecht).

Another inscription bears the name of St. Paul’s Abbey, betraying that it was housed in their library at some point, along with Ms. 685, which also contains a copy of the Lilium medicinae, and Ms. 695 (link). They may have served as works of reference after they were given to the abbey (cf. Gumbert 2012, 93, 95-96). In 1584, the abbey consigned its collection to the City Library, which would become the University Library in 1636.

The manuscript raises questions that have yet to be researched. Perhaps archival research can shed some light on the figure of master Alemberch. The partly erased note on the flyleaf awaits further technical research. The exact origin of the manuscript is still unclear, and the cover does not resemble binding work from Utrecht.