There existed a lively trade in manuscripts during the Middle Ages. Some books were ordered from abroad, some books gradually ended up elsewhere through trade or traveling. However, Ms. 681 from the Utrecht University Library needs to be noted as a special case. This manuscript was manufactured in France and ended up in Utrecht as war booty. It was captured in 1465 right after the Battle of Montlhéry (south of Paris), where king Louis XI fought against Charles the Bold, duke of Burgundy. The new owner of the manuscript was Charles' illegitimate brother David of Burgundy, the controversial bishop of Utrecht. And he had a good purpose for it.

Ms. 681 was compiled with a lot of care around 1250 and has an expensive appearance. The manuscript is manufactured on a very fine parchment, which presumably could be abortivum parchment. This kind of parchment was very valuable (Berger 2016, 271) and was not used for just any book. That this is a luxurious manuscript is also apparent from the layout. Not only is the manuscript provided with beautiful red and blue initials, various colourful grotesque initials with the use of gold powder can also be found. Apart from the many colours in these initials, several human and animal-like figures are visible. Examples can be found in the initials B on fol. 120r and P on fol. 171r. All of this implies that the original client had an expensive book in mind and certainly received what he asked for.

Unfortunately, we do not know whom this rich client was. However, we do know that the manuscript was captured in 1465 and came into the hands of none other than David of Burgundy, bishop of Utrecht. He gave it to his personal physician Anthonius Pottage. After Anthonius died, it was once again given to an episcopal physician: Johannes Keyl, as evidenced by the ex libris Keyl wrote on fol. 637r. Apparently the bishop was very fond of his physicians, given this expensive gift.Handboek voor lijfartsen

Some time later this manuscript was in the possession of Christianus Senden, physician and canon of the St. Salvator Church, which was demolished in 1587. He added his own name to the ex libris of Johannes Keyl. Senden was a physician of several Utrecht bishops, for example Frederick IV of Baden (1496-1517), David’s half-brother Philip of Burgundy (1517-1524) and bishop-elect Henry of the Palatinate (1524-1527). Thus, this manuscript has a long tradition of intensive use by physicians of Utrecht bishops. Not bad for a manuscript that was already two centuries old at the time!

The manuscript has been used intensively through the ages, attested by various user traces. The margins show notes of several hands and there are many maniculae ‘pointing hands’ to show what the user of that time thought was important information. Despite the rich appearance, the manuscript does not look clean. It seems the physicians have made good use of it.

Ms. 681 contains the Canonis Liber Medicinae (The Canon of Medicine), a translation in Latin of the Arabic al-Qānūn fī aṭ-Ṭibb. During the Middle Ages and long after, the Canonis was regarded as an authoritive work for doctors. It was compiled by Avicenna (980-1037), an influential Persian physician. Avicenna based his work mainly on theories by the classical physician Galen, but was also influenced by the philosophical approach of Aristotle. Remarkably, in the Middle Ages those were regarded as two opposite traditions (Musallam 1987, 94). The al-Qānūn fī aṭ-Ṭibb was translated into Latin in the thirteenth century by Gerard of Cremona as Canonis Liber Medicinae. From that moment onwards it rapidly gained popularity in Europe (Strohmaier 1996, 179).
The Canonis Liber Medicinae is divided in five books, which can be found in Ms. 681 as well:

With these five books collected in one canon the physician had a complete and extensive reference book, where he could find all information which was needed to practice his job.

But there is more... 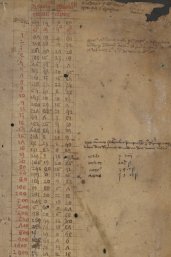 It is notable that from fol. 629r onwards, next to the already existing foliation, a new foliation counting from 1 was started. Ten new folia follow that were possibly added to this manuscript later in time. In addition, fol. 637 and 638 were made from a more thicker parchment. On fol. 638r a table was added by a later hand. This table looks similar to the Toledan Tables, which were astronomical tables used to measure the movements of the sun, moon and planets in relation to the stars. Astrology played an important role in medieval medicine. Because prognosis and diagnosis depended strongly on the position of the planets and stars, a medieval physician had to have this kind of information available to him. A table like this next to a medical text does make sense. But this table isn't filled out completely and therefore raises questions: what was its purpose and how does this table connect to the Canonis Liber Medicinae?