Traces of use in a 12th-century collectarius

Crossed out prayers, additions in the margin, added leaves: the 12th-century collectarius of the Utrecht chapter of St. Mary shows many marks of use. It is obvious that quite a few things changed in the prayers of the Hours and the collectarius is a unique witness to this process.

The chapter of St. Mary

From at least the 11th century onwards the chapter of St. Marie was situated at the Utrecht square still called the Mariaplaats. St. Mary’s Church, which was part of the chapter, was situated on the spot where now the school of music of the Hogeschool van de Kunsten is situated. The still existing cloister gardens were once attached to the church. We know that the main altar of St. Mary’s Church was consecrated in 1099. In 1811 the chapter was discontinued and soon after the church was demolished. 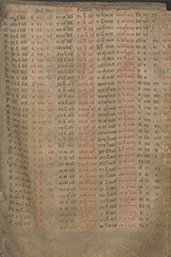 After 1811, the books from the library of the chapter of St. Mary moved to the Domein Archief. In 1844 they were transferred to Utrecht University Library. The books include 45 manuscripts, most of which date back to the 13th, 14th and 15th centuries. However, three of them date back to the early days of the chapter.

Firstly, we have the collectarius (Utrecht University Library Ms. 424, made between 1100 and 1150) which is discussed here. This manuscript contains the lessons, prayers and chants for the prayers of the Hours of the canons. Secondly, there is the manuscript which is currently housed in Meermanno (The Hague, Meermanno-Westreenianum Museum, Ms. 10 B 17, made around 1138). It contains the annals of the chapter of St. Mary, a martyrology, several rules, some charters and a number of papal and liturgical texts. And finally we have Utrecht University Library Ms. 406, an antiphonary which was made between 1130 and 1200, containing the chants for the Divine Office.

The actual collectarius runs from fol. 10v up to fol. 180v. At the beginning an extra quire has been added to the manuscript and at the end we have two more extra quires. The quire at the front of the manuscript contains a calendar of saints and information on the calculation of religious holidays. This quire must have been added at an early stage, as the numbering of the leaves in that quire starts and continues to the last quire of the actual collectarius. Moreover, it was common use that a collectarius was preceded by a calendar. The first quire was not fully filled with the calendar. On the first empty leaves and the last empty leaf we find prayers, probably written down around the time the manuscript was made.

The last quires have been added to the manuscript at a later stage. This is shown from the absence of foliation in these quires, but also the greater part of the script is clearly Gothic, so from after 1300.

Utrecht saints on the calendar

The calendar in the first quire of the manuscript is based on the martyrology of Usardus and includes saints who were characteristic of Utrecht such as Walburga (1 May), Radbodus (25 June and 29 November), Werenfridus (14 August) and Cunera (28 October). Also typical Utrecht holidays have been listed, for instance Pontianus (14 January), Servatius (13 May), Bonifatius (5 June) and the translation of Martinus (4 July).

Marks of use in the calendar 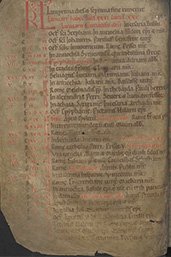 An example of such scraping away can be found on 2 April (fol. 4r). We can no longer read what has been removed, but we can still retrieve the facts. The addition of the letters ‘Mar’ in the margin at 9 April (the rest has been trimmed) suggests what the missing letters have to say. `Mar’ stands for Maria Egyptiaca on 9 April. This holiday was celebrated on 2 April in some places and in other places on 9 April. It is well possible that this holiday was originally entered on 2 April and was moved to 9 April by the users. This may give us some more information about the place where the calendar was made.

Furthermore the calendar was also adjusted if new important saints were canonised. For instance, Franciscan saints were added to the calendar. On 4 October, the dying day of Franciscus of Assisi who was canonised in 1228, we can read ‘Fra’ in the trimmed margin, and on 19 November the name of Elisabet has been added, referring to Elisabeth van Thuringen. This follower of Franciscus was added to the list of saints in 1235.

The most striking marks of use in the calendar are the obits (dying days) of the bishops, added by different hands. Usually we find the abbreviation for the Latin ‘he has died’, obiit; the Latin abbreviation of bishop, episcopus; or some letters of the names. However, with the help of the annals in the earlier mentioned manuscript from Meermanno which also contains the names and the obits of the bishops, we are able to understand the additions. The following bishops and their obits are:

Almost all of the bishops’ periods of office succeed one another. However, between 1150 and 1156 Bishop Herman van Horne is missing. His dying day was 31 January. Because the corner of the first leaf of the calendar has worn thin on the spot where an addition could be expected on 31 January it is possible that this reference once existed.

Also between the bishops Godfried van Rhenen (1178) and Hendrik I of Vianen (1249) there is a ‘gap’ in the list above. It may be that the reference at 4 June, of which we only can read obiit, is the only reference which does not refer to a bishop, but to the Holy Roman emperor Conrad II who died on 4 June 1039. 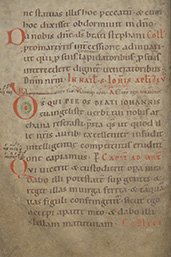 The great unknown in the table above is listed with a dying date of 7 August. It is not clear who is meant with this note. In bishops’ lists or overviews of canons there is no name which matches the still visible letters. The hand which wrote this addition and also the colour of the ink is different from the other still visible letters and additions. The date itself, however, can be connected to the chapter of St. Mary. On 7 August 1106 emperor Henry IV died. He was the one who commissioned the building of St. Mary’s Church. However, it is not clear how the still visible letters can be linked to him.

The manuscript also adapts to the growing number of religious holidays. Newly established holidays were given a place in the manuscript.

Between 1262 and 1264 the feast of Corpus Christi was introduced. In this manuscript the texts for this day have been written down on a separate leaf and this smaller leaf has been bound in the manuscript and is now fol. 80. The writing is clearly from a later date than the actual collectarius and also the style of the initials is different.

Another holiday established at a later date is the Visitation of Mary, mentioned in the Gothic script at the end of the manuscript. This holiday is mentioned for the first time in 1263 at the Franciscan chapter, spread as the breviary came into use and was established in 1389 by pope Urban for the entire church. For this holiday we find prayers at the end of the manuscript (fol. 185v) on a quire with a clearly later hand.

These added leaves show that the collectarius was still used by the canons well over two centuries after it was made.

Traces of use in the margins

In the Lent period the canons also dropped certain prayers. This is indicated in the margins on fol. 39v up to 59r. At most weekdays several prayers are mentioned and often one of them was dropped. This was indicated by crossing out (a part) of the first line of the prayer and the addition of the word non (not) in the margin. 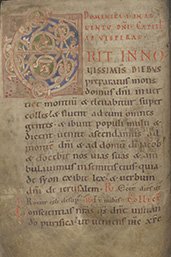 To make it easier to find certain passages tabs have been added. These are small handles at the long sides of the leaves, made by cutting in a strip of vellum lengthways and then to pull it through a cut in the leaf and to provide it with a small knot just outside the book block. Some are still visible at the outside of the manuscript, but when we take a closer look at the leaves more places can be spotted where the strips of vellum have been. However, only small vertical cuts are visible now. These tabs - or traces of them - can be found on the following places:

The tab on fol. 163 is different: the other tabs are at the first texts for the day in question. The one of fol. 163 falls in the middle of a day. The leaves that fall open at this tab are in the middle of the lessons and prayers for all virgins, the reading of the vespers is on the back of the left leaf. Maybe the tab was placed here simply to make sure that the major part of the texts of this particular day fell open.