It is often difficult to discover just how scholars from the past came by their information, because in their publications they hardly reveal their sources. That is why the 34 letters that Wouter van Gouthoeven wrote to Buchelius are so important: they offer a unique insight into the way in which both historians exchanged information, not only between themselves but also via their networks. An excellent postal communication was essential in this respect.

Wouter van Gouthoeven (1577-1623) worked in Dordrecht as an inspector of dikes and as an administrator for private persons. He came from a distinguished family, but being Catholic he was not allowed to work for the government. He was also a passionate historian and genealogist, always hunting for information. Initially for his book Beschryvinge ende chronycxken der stede Dordrecht (‘Descriptions and chronicles of the city of Dordrecht’) which was never published in the end, and next for his D’oude chronijcke ende historien van Holland (met West Vriesland) van Zeeland ende van Wtrecht, van nieus oversien (‘The old chronicles and histories of Holland (with Western Friesland), of Zeeland and of Utrecht, updated’) which was published in 1620. The long title hides the fact that for the larger part the work is made up of summaries and parts of other books, complemented by other information, mainly about Dutch officials which he had collected himself or received from other persons. 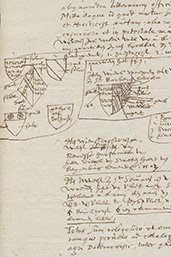 One such other person was Aernout van Buchell (Buchelius) (1565-1642), a Utrecht official who had converted to Protestantism. Many of his, often illustrated, manuscripts have survived, for instance his Diarium and his Monumenta filled to the brim with notes on history and genealogy. He also archived his correspondence with Van Gouthoeven. Between 1613 and 1622 the two men exchanged over 70 letters, of which 34 have survived. These 34 were from Gouthoeven to Buchelius. It was the period of the Twelve Years’ Truce, which gave both gentlemen the chance to travel around the Northern and Southern (Spanish) Netherlands; sometimes they visited each other.

As is shown from the letters and other documents, Van Gouthoeven and Buchelius not only exchanged letters but were also part of an entire network of humanist scholars who were in regular contact with each other. Those contacts crossed political and religious borders, one was a member of the Republic of Letters, in which academic values predominated. Often friends and family members (sometimes in-laws) were called upon to dig up information from archives or make notes. In this way they could get hold of a pedigree they wished for or a heraldic illustration. For genealogical information, which was certainly not always used in Van Gouthoeven’s books, the letters are of great value for the history of certain families.

In the letters, personal affairs are only touched upon briefly. Sometimes goods were sent, such as books. In 1613 Buchelius’ wife received two ducks which Van Gouthoeven had caught in his decoy. Some letters were taken by acquaintances from one city to the next, but usually the letters were transported by bargemen, with porto (postage due, the receiver pays) or with franco (the sender pays). So also for the history of postal delivery in the Netherlands, these letters are of interest

Van Gouthoeven’s letters are written in Dutch, French and Latin; sometimes we find all three languages in a single sentence. In 2017 the letters edited by Kees Smit, including an extensive introduction and many annotations, were put online. The digitised version of the original letters can also be viewed online. Now this special correspondence has been made available for a broader audience.