Book of hours and book of prayers ca 1430

In the late Middle Ages many literate lay persons ordered Books of Hours, which were used to stimulate the leading of a devout life. The rich had their manuscripts decorated. This did not only concern beautiful miniatures and illuminated initials, but also sumptious border decoration. For modern researchers the border decorations have much to say about developments in style and cooperation between artists. 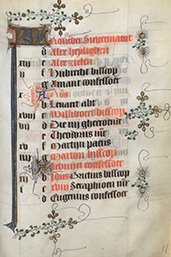 Ms. 1037 is an incomplete Book of Hours. In its present form it contains a Calendar for the diocese of Utrecht, the Hours of the Virgin, the Hours of the Holy Ghost, the short Hours of the Holy Cross, and a prayer to St. Anthony Abbot. The Seven Penitential Psalms and the Office of the Dead, texts which are normally part of any Book of Hours, are missing. After fol. 62 a leaf from the Hours of the Virgin, which probably contained mainly textual matter (cf. Van Wijk 1940, 68-69), has been torn out. The first leaf of the short Hours of the Holy Cross (after fol. 88) was cut out probably because of the historiated initial it must have contained. Unfortunately, the present whereabouts of this leaf – assuming that it has been preserved – is unknown.

Until fol. 97r the manuscript is written by one hand, and the penwork and decoration are also uniform. At 98r a new quire begins, which is written by a different hand. The penwork is also a bit different, but still belongs to the ‘Bulges-and-long-lines’-style (Gerritsen-Geywitz 2003; 2009, 21). The border decoration also slightly diverges with regard to motifs. This is the part with the prayer to Saint Anthony Abbot. It begins with Een minlike bedinge totten groten here ende maerscalck Sancte Anthonis (‘A loving plea to the great lord and marshal Saint Anthony’).

Saint Anthony of Egypt was among others the patron saint against the plague (see Hulshof 1937 for an edition of the text). It is likely that this part was added at the same time or shortly after the production of the Book of Hours proper, in the 1430s. From fol. 103r to 117r a quire was added with seven prayers, written by yet another scribe, who also added the text on fol. 97r. The penwork is not easily to interpret, but points to the late 15th century. Hence it appears to be a later addition.

Now still extant are two historiated initials, of which one is slightly damaged. The Hours of the Virgin opens with a somewhat stained, yet engaging, picture of the birth of Christ, with Mary in her confinement holding the swaddled baby in her arms while Joseph prepares a meal (fol. 13r). The beginning of the Hours of the Holy Ghost shows the moment when the Holy Ghost descends on Mary and the twelve disciples in the shape of a dove. Both depictions are contained in a strikingly large, blue initial, which takes up three quarters of the entire written space.

These two historiated initials are characteristic of the most important miniaturist working in the Northern Netherlands in the 1420s and 1430s. Since his identity is unknown, he has to make do with a provisional name: in the older literature he is referred to as Master Pancracius, while nowadays he is known as the Master of Zweder van Culemborg. The latter name refers to his extensive contribution to the illumination of an important Missal currently kept at Brixen (Bressanone) in the Biblioteca del Seminario Maggiore (Ms. C. 20). It was made for Zweder van Culemborg (†1433), who was bishop of Utrecht from 1425 and bishop of Caesarea from 1432. The miniatures by the Master of Zweder van Culemborg achieve a level of artistry unrivalled in this period of miniature painting in the Northern Netherlands. His prominence gathered a following; unmistakable, for example, is the influence he had on the Master of Catherine of Cleves, the most famous miniaturist of the Northern Netherlands, who among others decorated the Pontifical of Saint Mary’s (Ms. 400).

The historiated initials in Ms. 1037 belong to the last period of the Master of Zweder van Culemborg, the 1430s. The depiction at fol. 66r closely resembles that on fol. 173v of the above-mentioned Missal in Bressanone, the only difference being that the latter is a mirror image (depicted in Scheiber 1992, 82-83). A composition also practically identical occurs in a miniature created by the same master in a privately owned Book of Hours in Germany (depicted in Byvanck 1937, fig. 123).

The border decoration in Ms. 1037 is also remarkable. It  occurs on many pages: a gold, blue, pink bar with some fine ink sprays with small green petals and gold trefoils or small golden balls, spheres or round leaves with cilia. On the leaves with the two historiated initials the border decoration is more exuberant: a bar sprouting elegant ink sprays and the same green and triple gold leaflets, winding around a thin gold horizontal stave in the upper and lower margins. This type also occurs in other manuscripts decorated by the Master of Zweder van Culemborg, but there are striking similarities with two manuscripts which are now in the Fitzwilliam Museum in Cambridge. Ms. 141 is a Middle Dutch Book of Hours, in which we also find small golden balls with celia and other characteristics. Likewise, the penwork and script are very similar to our Ms. 1037, although it partially contains different texts (Morgan & Panayotova 2009, 48-50, nr. 15). Ms. 289.I-III is a Latin Bible in three volumes made for Gijsbrecht van Lochorst (†1454) or his brother Herman (†1438). Here we see all sorts of illumination, border decoration and penwork, but all the styles in our Ms. 1037 until fol. 97r are represented (Morgan & Panayotova 2009, 39-48, nrs. 12-14).

The interpretation of the similarities and differences in the manuscripts attributed to the Master of Zweder van Culemborg and his circle is a complicated matter – not to speak of the influence of his work on others. Hence the small golden balls with celia return in various shapes in manuscripts from Utrecht and elsewhere in the decades around 1450. To make sense out of the various yet similar looking miniatures, historiated initials, border decoration, penwork styles and scribal hands necessitates a careful study. For example, there are notable differences between Ms. 1037 and the Egmond Breviary (Ms. 12 C 17), though both are decorated by the Master of Zweder van Culemborg. To obviate these uncertainties one now usually speaks of the Masters of Zweder van Culemborg (plural). It is in any case clear that several persons cooperated with each other in Utrecht to produce and decorate manuscripts. Research by Miranda Bloem will throw more light on this group.

The manuscript passed through several hands before coming into the possession of the man of letters Balthazar Huydecoper (1695-1778), who also possessed, among others, Ms. 1020. He may also have ordered the manuscript to be rebound. In 1779 Huydecoper’s collection was auctioned, and the Book of Hours came into the hands of the literary scholar Nicolaas Hinlópen (1724-1792) from Hoorn. In 1882, the state archivist in Utrecht transferred the manuscript to Utrecht University Library.