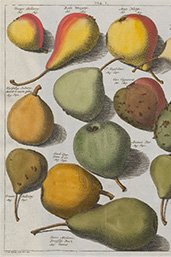 The apples for consumption, as known to us now, can be genetically traced back to a variety from Kazakhstan, the Malus sierversii. Via Iran, Turkey, Greece and the Roman Empire this fruit spread throughout Western Europe thousands of years ago. By coincidence as well as by conscious cultivation numerous fruit varieties originated in this way. The gardener of German origin Johann Hermann Knoop (1700/1706?-1769) was the first to systematically research these varieties, and other fruit and plant varieties too. From the mid-18th century he published all kinds of scientific books on the subject. This urge to publish was born more or less from financial distress: according to history, around 1749 Knoop lost his job as gardener of the Frisian country estate Mariënburg due to alcohol abuse …

After being fired, Knoop wrote many books, mainly in the field of botany. Best known are Pomologia, Fructologia and Dendrologia. In the Pomologia (1758) Knoop not only identifies more than a hundred apple varieties, but also over ninety pear varieties. As Knoop states in his introduction:

(‘If one has an apple or a pear of which one does not know the name of, one only has to check the pictures, as well as the descriptions, and compare the fruit with one or the other, thus almost certainly finding its name’.)

In the Fructologia (1763) Knoop describes all kinds of other fruits, such as cherries, plums, peaches etc. The Dendrologia (1763) offers an overview of plants needed for the planning of pleasure gardens and parks. The book shown here contains the three publications in one volume, a so-called convolute. Probably the three books were published as a joint publication, as they are all second editions which saw the light around 1763.

A fine future as a gardener? 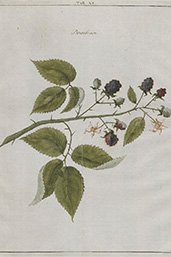 How did Knoop, born in Kassel in Germany, gain his thorough knowledge of cultivated and ornamental plants? It was his father, court gardener and manager of the Royal Pleasure Garden in Freienhage on the Fulda, who taught him everything there was to know. In addition, Knoop had an extraordinary personal interest in botany and thus to all appearances a golden future as gardener lay in store for him. Even more so after princess Maria Louise van Hessen-Kassel appointed him director of horticulture at her country estate Mariënburg near Leeuwarden.

Unity in the gardens

Maria Louise, who had been the wife of the early deceased Frisian deputy king Johan Willem Friso (1687-1711), proved herself to be an ardent lover of garden art. In the period between 1721 and 1731 the widow bought several houses and pieces of land south-east of Leeuwarden. In this way a complex of gardens, including some buildings, was created measuring approximately five hectares. The complex was named after the princess. To bring more unity in these gardens, she hired the services of gardener Johann Hermann Knoop. Maria Louise, herself born in Kassel, knew Knoop already as the son of her father’s gardener. 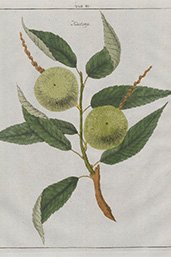 In his new job, Knoop got every opportunity to do botanical research. He must have felt like a fish in water. Besides supervising Maria Louisa’s garden, he also acted as the gardener of the garden of the deputy king or Prince’s Garden. However, the large orchards at Mariënburg with its many fruit trees were the pride and joy of Knoop, who learned a lot about cultivating fruit. He also liked to distill gin from fruits and this eventually led to his downfall. According to reports, Knoop got the sack around 1749 due to his alcohol abuse. To support himself, Knoop applied himself to writing. Initially books on the art of gardening, later he also wrote about other subjects such as mathematics and astronomy. As a result, he became a versatile scientist and publicist.

Especially with the Pomologia, Knoop broke new ground and that is why he is regarded as the father of the pomology, or the study into fruit varieties. He was the first to publish overviews, lists of synonyms and accompanying scientific explanations of apples and pears from Dutch, German, English and French regions. Furthermore, the Pomologia has many beautiful illustrations which almost seem three-dimensional through the use of shadow effects. The drawings were engraved by Jacob Folkema and Jan Casper Philips and coloured in by the daughters of the Leeuwarden publisher Abraham Ferwerda. In total the publication contains twelve plates with 103 depicted and 125 described apple races and eight plates with 82 depicted and 92 described pear varieties. The Fructologia has fewer illustrations: nineteen plates, of which six are alas missing in the Utrecht copy shown here. The Dendrologia is not illustrated. 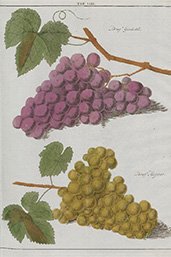 What did become of Knoop in the end? As is usually the case with geniuses, his life did not end very well. Although he wrote excellent scientific publications in many fields, his love for alcohol apparently got the better of him. As we can read in the Nieuw Nederlandsch biografisch woordenboek (1911-1937, volume III, p. 706):

(‘[…] However, his many qualities could not save him, as he was addicted to alcohol, from declining into dire poverty. In the end he had to go on the parish’.)

In other words, his hobby led to his downfall. However, to posterity he left thorough reference works on old fruit varieties which still play an important role in the development of new fruit varieties …