The largest visitors' book in the world 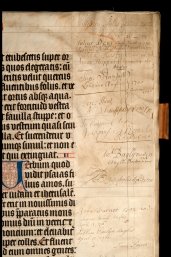 Names of visitors to St. Mary's Church written in the Zwolle Bible

Six volumes of twenty kilos each, over 1700 parchment leaves measuring circa 56 x 48 cm, fourteen years of labour by one man, 125 illuminated initials: the Zwolle Bible has quite impressive statistics. This imposing book has led an eventful life. However, it was never the plan that this bible would become the world's largest visitors' book. In the decades around 1700 hundreds of visitors to St. Mary's church left their names on the parchment. Dozens of beautifully illuminated initials were cut out, leaves were ripped from the book, of which some turned up centuries later. There are not many medieval manuscripts which have made such a switch in their career.

On the one hand, we know many things about the Zwolle Bible: who commissioned it, how much it cost, who wrote it, the time it took the copyist to finish each volume, his average writing speed, which manuscript he used as an example and probably we also know who illumated it. But on the other hand there are still many unanswered questions about this impressive monument that fell victim to graffiti and hooligans, but survived it all in the end.

Go to the digital version of the Zwolle Bible