Newton through the eyes of an amateur 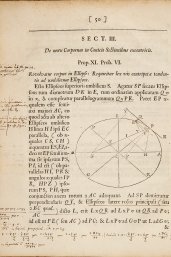 Isaac Newton’s Philosophiae naturalis principia mathematica is widely regarded as one of the most important publications in the history of science. His universal laws of motion and of gravity and his mathematical and empirical approach to physics would dominate scientific thinking for about two centuries. The reception of the first edition of the Principia (1687), especially on the Continent, was of crucial importance for the spread of Newtonianism beyond the British Isles. A new witness to this process is now being brought to light: a copy of the first edition of the Principia, annotated by the Amsterdam merchant, writer and amateur mathematician Adriaen Verwer. A man who deserves to be called the first continental Newtonian – although he did not always agree with the British scientist, and 'misused' him for his own purposes. 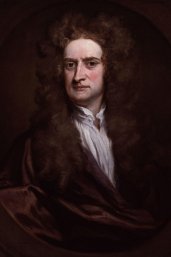 Together with  Albert Einstein (1879-1955), Isaac Newton (1642-1727) is the most famous icon of modern science. He owes his fame mainly to the three editions of his Philosophiae naturalis principia mathematica  (Mathematic principles of the philosophy of the natural sciences) from 1687, 1713 and 1726.

The first edition of the Principia was not an immediate success however, and certainly nobody outside England took any notice of the revolutionary work. Except the Amsterdam merchant Adriaen Verwer (1654/5-1717).

Substantial comments on parts of the Principia 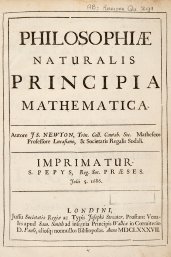 Title page of the first edition of the Principia

Verwer bought his copy of the Principia immediately in 1687, and the remarkable thing is that we can witness how he processed Newton's mathematical hypotheses. The first edition of the Principia has 495 pages (besides the preliminary and closing pages), numbered 1-383 and 400-510 (384-399 are missing without loss of text). Of these pages, 190 are annotated, of which 35 only by underlining or arrows in the margin. The remaining 155 mostly contain one or two short annotations or references, but there are a few dozen pages to which Verwer had added substantial comments. At the end we find four handwritten pages with indices and some supplementary remarks.

Of the first edition of the 'Principia' around 250 to 400 copies were printed. Approximately 50 copies were meant for export to the Continent, recognisable by the imprint Prostant Venales apud Sam. Smith.

Who was this Verwer, who had such an interest in the provoking mathematics of Newton? As the son of a Rotterdam Baptist merchant he grew up in a tolerant social environment.  In 1680 Verwer moved to Amsterdam and made a name for himself as a merchant, but also as a theologian, philosopher, linguist, mathematician and as an expert in the field of maritime law. In Verwer's head alarm bells started ringing when he read the new philosophers, for instance René Descartes (1596-1650) and especially the radical Baruch (Benedictus) Spinoza (1632-1676) who explained the world in such a mathematical way that there seemed no room left for God, Christianity and wonders.

In 1683 Verwer published his ’t Momaensicht der atheistery … een grondige wederlegging van de tegenstrijdige waen-gevoelens en in ’t bysonder van de geheele sede-konst van Benedictus Spinoza. (‘The face of atheism… a thorough refutation of the contradictory delusions and especially of the complete ethics of Benedictus Spinoza’). He blamed Spinoza for using abstract, hypothetical mathematics, not the applied mathematics which relate to the existing world, such as astronomy does. Verwer begins to make a name for himself in intellectual circles. If he reads the Principia, he sees the work as an extra weapon to use against what he sees as upcoming atheism.

Pages 56 and 57 from Newton's Principia, with annotations by Verwer

Verwer's notes in the Principia

Who loosely inspects Verwer’s notes cannot but notice that he is familiar with quite a number of prominent mathematicians and astronomers. In chronological order from Euclid and Archimedes to Verwer’s contemporaries, for instance Spinoza and Christiaan Huygens. The most frequently cited author is David Gregory. The most recent publication he quotes (on p. 251) is Charles Hayes, Treatise on Fluxions (Londen, 1704), in which Newton’s infinitesimal calculus is explained. All notes are in Latin, sometimes something is scribbled in Greek, and one or two times the notes are in Dutch.

Exactly when Verwer added his annotations is not clear, and judged by the ink and the writing this could be done at different times. It looks like he also kept notes in note books, as is shown from the annotations on pp. 251, 273 (from 1713), 374 en 375 (from 1713), in which he also refers to his corrections on Newton. Also the works by Gregory (p. 250) and René-François de Sluse (p. 283) were analysed in this manner. Verwer did a serious and solid job and did his best to grasp the Newtonian mathematics. 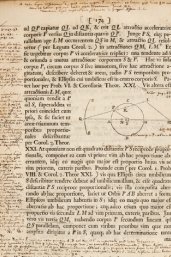 Part of page 174 with annotations by Verwer

Between 13 and 15 October 1723, Verwer's library was sold by auction in Amsterdam. There is no auction catalogue and we do not know who owned the annotated Principia after that date. On 27 February 1984 the book was included in the collection of the library of the Katholieke Theologische Hogeschool Amsterdam (KTHA) ((‘Catholic Theological Academy Amsterdam'). In 1999 Utrecht University Library acquired a part of that library.

It is generally known that Newton’s victory march on the Continent started with the publication of the second edition of the Principia in 1713. Mainly Dutch scholars were responsible for this success. Verwer and men from his network, in particular Jean le Clerc and Bernard Nieuwentijt had already taken care of a fertile breeding ground for Newton's ideas, even though they used him as defence against the new philosophies of Descartes and Spinoza (Jorink and Zuidervaart 2012). Verwer's central and inspiring role  through his versatility and network of scientists and researchers played a major part in this process. Therefore he may be regarded as the first continental Newtonian. Not bad for an amateur!

This is a summary (with some additions) of the internet publication by Bart Jaski, 'Newton door de ogen van een amateur', published in April 2013

Adriaen Verwer's ex libris and the year 1687, probably the year in which the bought the 'Principia'.