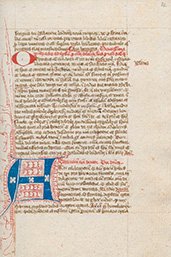 One of the most prolific writers from the Low Countries in the middle of the 15th century was Jacobus van Gruitrode (Jacob de Gruytrode). One of the works of this Carthusian monk is the Rosarium Jesu et Mariae. The oldest manuscript of this text is kept in the Utrecht University Library (Ms. 229). It comes from the Augustinian canons regular in Utrecht. How the manuscript was disseminated shows how this work spread over the other Utrecht monasteries and beyond.

Jacobus van Eertwach was born in Gruitrode near Maaseik somewhere between 1400 and 1410. He entered the Carthusian order, a solitary community where life consisted of prayer, meditation, silence and study. From 1440 until his death in 1475, Jacobus van Gruitrode was prior of the monastery Alle Apostelen (All Apostles) near Liège, with the exception of the years 1445-1447 when he held that position for the monastery Sion near Zierikzee. He was friends with Dionysius the Carthusian (1402-1471), who was for many years attached to the Carthusian monastery Bethlehem near Roermond. Jacobus wrote his works anonymously, but mainly through a list of his works published by Johannes Trithemius in 1494 (119v) many of them can be identified.

The long version of the Rosarium

Jacobus wrote the Rosarium Jesu et Mariae at a relatively young age. Around 1430-1435 he first produced a long version entitled Hortulus aurearum rosarum Jesu et Mariae (‘Small garden of the golden rosary of Jesus and Mary’) of which only one manuscript has been handed down to us (Brussels, Royal Library, II 468) and which was probably written by five persons. Jacobus himself added the titles and the rubrics to the manuscript. He was also the one who bound it. In a 1663 publication another copy in the Carthusian monastery Bethlehem is mentioned, dated to 1471, the year in which Jacobus’ friend Dionysius the Carthusian died. The work mainly contains spiritual exercises for each day of the week, related to the life of Jesus and Mary (who was especially worshipped by the Carthusians). As Jacobus said himself, these exercises were taken from the writings of the Church Fathers and other important clergymen.

The short version of the Rosarium

Shortly after finishing the long version, Jacobus made a shortened version at the request of two fellow monks. Together with a fellow monk he picked the “ finest roses” from the long version and trimmed about half of the text, but he also added some things here and there. The beginning of the text remains the same: Fasciculus myrrhe dilectus meus… Before 1445 a Middle Dutch translation was made as well, entitled Die roesenghaert Jhesu ende Marie, which again differs from the Latin text at some points. Of each shortened version in Latin and in Middle Dutch eight manuscripts have been passed down to us, according to Jan Deschamps (1985-b). The oldest one dates back to 1439.

Deschamps mentions eight manuscripts of the Rosarium Jesu et Mariae: Utrecht, University Library, Mss. 170, 227, 228, 229 (all four from Utrecht); London, British Library, Harley 2926 (written in 1470) and Toledo, Archivo y Biblioteca Capitulares, 21-34 (written in 1481), both from the Benedictine monastery Subiaco, east of Rome; and two manuscripts with excerpts from the Rosarium, which also seem to be related to each other, namely Darmstadt, Hessische Landes- und Hochschulbibliothek 2274 (1439, from the Carthusian monastery in Wesel) and Paris, Bibliothèque de l’Arsenal, 953 (15th century, from the Carthusian monastery Alle Apostelen near Liège). In 1742 the Carthusian monastery Bethlehem near Roermond also housed a copy.

In the manuscript catalogues of the University Library of Basel three more manuscripts with the Rosarium are mentioned (Steinmann 1982, 27, 132, 443; cf. Bodemann-Kornhaas 2002, 149): A X 92 (first half of the 15th century, from the Carthusian monastery in Basel), and a related manuscript with excerpts, A X 142 (olim B VIII 14) (decades around 1450, from the Dominican monastery near Basel). In the case of A IX 95 (written in Basel in 1454 by Balthasar, abbot of the Cistercian monastery Zinna, near Jüterborg, south of Berlin) it concerns quotations from the Rosarium (cf. Von Scarpatetti 1977, 85 no. 228).

A striking detail is that apparently the Rosarium spread from Liège to Roermond/Wezel, Utrecht, Basel and Subiaco. As far as we know, the text has always been passed down in connection with other texts, which, in the cases of Utrecht, Basel and Wesel, are always unique.

Of the four Utrecht manuscripts Ms. 229 is the oldest one. Deschamps (1985a, 112-114) dates it back to the years 1440 to 1450. The Rosarium is preceded by a short text bearing the title Abbas Serenus in collaconibus patrum (‘Abbot Serenus in the conversations of the fathers’) which begins with Anima naturaliter numquam … The Rosarium is followed by another short text text, having as title Lamenatio peccatorum qui est valde utilis (‘Lament of the sinners which is very useful’) containing a number of quotations. It starts with Quis dabit capiti meo aquam, et oculis meis fontem lacrimarum (Jeremiah 9:1), ut defleam vulnera anime mee?, a quotation attributed to the Church Father Ambrosius of Milan. The two adjacent small texts are instructional texts for the monastic life. For instance, Abbot Serenus appears in the Collationes (‘Conversations’) of the founder of Western monastic life Johannes Cassianus (died in 435).

Exactly the same lay-out ( Abbas Serenus … - Rosarium- Lamentatio peccatorum) as in Ms.229 can be found in Ms. 228, which was written in 1495 by a novice ( someone in his probationary period in a monastery) from the Utrecht canon regulars. It is very likely that he copied the text from Ms. 229. But the Rosarium also spread elsewhere in Utrecht. Ms. 227 was written in the Carthusian monastery Nieuwlicht (Nova Lux) around 1460. Also in this case, the Rosarium is preceded by Abbas Serenus…, but is followed by other texts. In Ms. 170, written by the novice Johannes Mersen in St Paul’s Abbey, it is the other way around: the Rosarium is preceded by a number of other texts, but is followed by the Lamentatio peccatorum (although the title is missing). The author of this text remains unknown. It is not Oglerius de Locedio as some think, although he also wrote a text with begins with a quaotation of Jeremiah 9:1.

The spread of the Rosarium

The Utrecht manuscripts give us an important insight into the spread of the Rosarium. All of them share the same textual tradition in which the Rosarium is always in between Abbas Serenus… and/or Lamentatio peccatorum. None of the other manuscripts show this lay-out. Probably the Rosarium first spread within the Carthusian order, for instance to Roermond, where Jacobus van Gruitrode had close contacts. Next it may have gone to Utrecht, first to the Carthusian monastery Nieuwlicht, then on to the Augustinian canons regular (Ms. 229 and a copy, Ms. 228) and St Paul’s Abbey (Ms. 170). From Nieuwlicht only a later copy is left (MS. 227) which is incomplete near the end. Possibly it was written by a novice, as is the case in Ms. 227 en Ms. 170. The instructional character of the Rosarium makes it very suitable for candidates wanting to enter a monastery. As far as we can gather, the Rosarium spread in a similar way in Basel, where one manuscript belonged to the Carthusians, one to the Dominicans, and one was written by a German Cistercian who was staying in Basel.

As a modest Carthusian, Jacobus does not speak highly of his work. He mainly borrowed the texts from other ones. It is not a scholarly text and offers no new insights. This might explain why the spread of the Rosarium stopped after a few decades. The Utrecht and Basel tradition suggest that, via Carthusian monasteries, the text was taken up locally by other orders, and that it was found suitable for novices to copy, especially in connection with other instructional texts. The Middle Dutch translation met with some response among the followers of the Modern Devotion. For the present day the value must be sought in the way in which the manuscript was handed down, even though more research must be carried out to get a better picture.