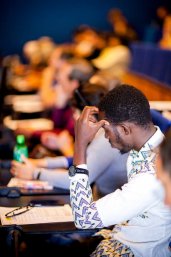 While waiting for their residence permit in an asylum seekers’ centre, refugees are often excluded from the rest of society. Research shows that this particular type of exclusion is one of the reasons why so few refugees participate in the labour market. Exclusion also causes loneliness, depression and other psychological disorders among refugees.

The premise of the InclUUsion programme is therefore to offer refugees a chance to study as soon as possible after their arrival in the Netherlands.

From summer school to Master’s degree
InclUUsion started life as a small-scale summer school on the initiative of Marij Swinkels, Hilke Grootelaar and Elena Valbusa, but soon expanded to English-language Bachelor's courses. The initiative has since been introduced at other universities, such as Wageningen University & Research and Eindhoven University of Technology. Participants now move on to take part in regular academic programmes, and some have even already completed their Master’s degrees.

For example, in 2018 Yves Faustin Nahimana from Burundi started a regular Master’s degree in Conflict Studies and Human Rights at the Faculty of Humanities.

“The InclUUsion programme really helped me to find my feet in the Netherlands. By taking courses I got a new identity as a ‘student’ instead of just as a refugee. Being a refugee and living in an asylum seekers’ centre is hard. Many people say or think negative things about us. Thanks to the programme, I felt part of society and expanded my network.”- Yves Faustin Nahimana