What works: Researchers from Utrecht University to conduct study into better welfare benefits 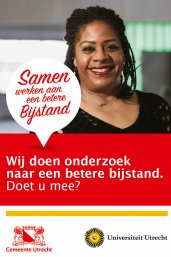 In collaboration with the municipality of Utrecht, researchers from Utrecht University are starting a study into a better approach to welfare benefits. The large-scale scientific research takes place from June 2018 to October 2019.

Alderman Victor Everhardt: "The current rules in social assistance are complicated and strict. The City of Utrecht wants to know if it can be done differently. We will try this out in practice, together with a group of 900 welfare recipients. "The research is called 'What works' ('Weten wat werkt').

There will be four research groups. Each group will try a different approach. Participants cannot choose a group themselves, but will be randomly assigned to one of the four groups. After one and a half years, the researchers can draw conclusions about which approach works best. Principal investigators Prof.Dr. Stephanie Rosenkranz and Dr. Loek Groot: "We investigate the different effects that a different approach can have on welfare recipients. We look at whether people find work more quickly, but also to study the effect on their health, on their financial situation and whether people are more or less satisfied with their own situation."

The four research groups are:

At the end of February the recruitment of 900 participants for this study started. Welfare recipients who can participate will be informed by letter. Next to that, there will be information meetings in several neighbourhoods and a special consultation hour at the municipal office. Participation in the study is voluntary.

Based on behavioural insights

The study is based on insights from behavioural sciences. Research in this field of study shows that people often behave differently from what we would expect according to, for example, standard economic theory. According to the researchers there are in particular three behavioural aspects that can be relevant in the context of welfare benefits: (1) Concerns for reciprocity, that is people’s tendency to reward kind actions and punish hostile actions. (2) Motivation crowding out, which refers to a mechanism in which extrinsic motivators (such as rules or punishments) can undermine intrinsic motivation (for example for finding work). (3) The detrimental effects of poverty and financial scarcity on the individual’s cognitive capacity.

More information on this study can be found (in Dutch) on the website of the City of Utrecht.