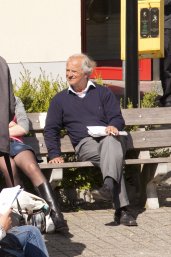 On Wednesday 17 February 2021, dr. Jaap Wilting passed away, 76 years old. Jaap was a staff member of our Pharmaceutical Chemistry division and founded our research institute Utrecht Institute for Pharmaceutical Sciences in 1992. He was managing director of UIPS till his retirement in 2009.

A bit of historic context will help appreciate how much we owe to his foresight and perseverance. The faculty of Pharmacy was basically a teaching faculty till the early 1970s, without much of a research history. The first research professors in the 1970s had an excellent analytical chemical expertise, which also defined the pharmacy curriculum of that time. In the 1980s more research disciplines like pharmacology and pharmaceutical chemistry started. The national reorganization of Pharmacy and Dental medicine faculties in 1983 led to an enormous increase of students from Leiden and Amsterdam, where the faculties of Pharmacy were closed. However, the associated research funding was not transferred to Utrecht, so again, it was in danger of becoming a teaching only faculty. Jaap Wilting and Daan Crommelin managed to persuade the University board to start an ambitious research institute, and invited international peers for consultation. This led in the 1990s to new research professors like Wim Hennink, Rob Liskamp, Frans Nijkamp, Bert Leufkens and Albert Heck, shaping the five divisions that still are the pillars of UIPS.

When the faculty of Pharmacy was merged with others in the faculty of Science in 2005, Jaap entered the university council. In a national perspective he was instrumental in founding the FIGON and the Top Institute Pharma, bringing the Dutch field of pharmaceutical sciences to a globally competing level. Jaap had very modern ideas about teaching and had very idealistic ideas about society at large. Do not take, but give, was his adagium. Our students will remember him also  as the organizer of their annual wine tasting event. And our institute will remember him sitting on a bench, basking in the sun, Sol illustra nos. And he was an inspiration to us all. We wish Stieneke, Ingeborg, Jeroen and their family members strength in coping with this loss.