Report from the Summer School - Game Design and Development 2017

The summer course Game Design and Development was offered by the University of Arts Utrecht (HKU) and Utrecht University from August 14-18, 2017. The school took place at the premises of the HKU and included interactive hands-on game design workshops, theoretical game design analysis classes, and programming sessions. During the one week summer school, 9 teams of five participants designed and implemented a game related to climate change as a major challenge for policy makers.

Lecture during the summer school

Ambitious climate goals have been set, that many see as politically controversial and very hard to achieve. At the same time, climate change is expected to have major impacts on human and natural systems – and the first impacts have already occurred. Agricultural systems and food security are among the human systems that are facing grave threats, especially in the Global South. These radical climate futures represent a challenge to the imaginations of policy makers engaged in national policy making and in international climate negotiations. Games have a lot of potential to help policy makers imagine and experiment with such radical climate futures and their impacts on food systems and other human and natural systems. 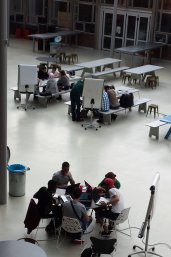 Students working on their games

The summer school course consisted of two tracks: the design track (including topics such as game art, game audio, paper prototyping,  digital prototyping, and entrepreneurship), and the development track (including C#, Unity3D, SCRUM, and feedback sessions). The social program included a visit to Awesome Space. Awesome Space has over 100 retro-consoles, home computers and arcade machines to play great classic games.

On the final day, the 9 teams pitched the games they developed during the week, at the Dutch Game Garden, an Utrecht-based incubator for game company start-ups. Each of the games was scored and commentated by a team of judges.