Reflecting together on the openness of cities around the world 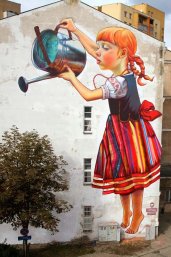 What is an open city? How is it governed and spatially organised? And how can it be studied? These and more questions were asked in the webinars and workshops organised to launch the new Open City Initiative from March 16 to 26 2021.

A group of researchers from the Utrecht University Faculties of Geosciences and Social Sciences convened the Initiative with the goal of creating a global network of transdisciplinary exchanges — not only in terms of research, but also to promote education and societal partnerships. As there is often little contact both between different faculties and between academia and non-academic actors, the convenors saw the need to connect people by providing a platform for knowledge exchange. The Centre for Global Challenges provided such a platform and many events were co-organized with researchers from UU-wide strategic themes such as the Pathways to Sustainability and Institutions for Open Societies.

The series of webinars and workshops generated lively discussions on a range of topics related to cities as open spaces around the world. As one of the organisers put it, the online setting has allowed participants to be as close to travelling across continents and between different cities as you could wish for in the current COVID-19 times. The series was launched with a keynote by Roberto Rocco from TU Delft about the concept of the open city and spatial justice with a discussant Rike Sitas from the African Centre for Cities, who gave empirical reflections on generational and political aspects of trying to address openness in relation to justice in cities. This was followed by the Corona Governance in Urban Margins webinar series organised by Sterre Gilsing, Kees Koonings and Martijn Oosterbaan. The series took participants to cities in Kenya, Brazil, Mexico, Mozambique, and Guyana, guided by researchers based in these cities.

In another webinar organised by Francesca Pilo and Kei Otsuki, four distinct NGO representatives shared their experiences with sustainable solutions being experimented in Rio de Janeiro, Brussels, Kampala, and Utrecht. The workshop “The more-than-human city” presented an exchange program between Utrecht University and Hong Kong University initiated by Rick Dolphijn and Gray Kochhar-Lindgren. Videos created by students from both universities showed impressions of the two cities, and critically reflected on the concept of openness in light of current political developments in Hong Kong. In another workshop co-organized with the Transforming Cities Hub of the Pathways to Sustainability, Kei Otsuki and Ajay Bailey asked the participants to think along the concept of inclusive cities. The participants actively shared their thoughts on inclusivity through an online mural board. Finally, an opportunity was offered to think creatively about the open city through a workshop on creative urban methods organised by Jente Hoogeveen and Sigrid Merx. The participants came to think about openness in their own neighbourhoods and to track this by drawing a map of different colours through a small walk.

Besides being able to travel to different cities around the world in an online setting, people who were usually working in separate organizational settings were actively in conversation with each other and came to reflect together on the concept of openness in the context of cities in which they worked. These knowledge exchanges were one of the main goals that the Initiative planned to achieve. A lot of positive energy emerging from these exchanges showed that the Open City Initiative did spark enthusiasm.

So, what are the next steps? The Initiative will continue its endeavour of setting up a transdisciplinary Open City Network further connecting people both within and outside academia. The conveners plan another series of events in autumn 2021 in collaboration with the webinar and workshop organizers of this first series. Stay tuned for updates! For more information or questions, please send an email to: opencity@uu.nl.