Utrecht University chemist Peter Ngene is one of the seventeen Next Einstein Forum Fellows 2017-2019, Africa’s most outstanding and promising young scientists. On 27 March, he formally received the award from the hands of Paul Kagame, president of Rwanda and currently Chairman of the African Union.

The ceremony was held at the NEF Global Gathering, a Pan-African scientific event in Kigali, Rwanda, in the presence of African leaders and of renowned scientists from all over the world.

Peter Ngene is working on novel materials for energy storage that will enable the energy revolution the world is hoping for. “We are moving to renewable energy like solar and wind energy. They are not available all the time, so we need to develop ways to store the energy. I am trying to make the next generation of batteries for this aim. With those batteries in electric cars, we will be able to drive 500 km instead of 150 before they will have to be recharged.”

The award, which is an initiative of the African Union, is named after Albert Einstein, illustrating the African wish to deliver the ‘next Einstein’. With the award, Peter Ngene and the other sixteen winners have been offered mentorships by excellent more experienced African scientists. Ngene: “During the Gathering, we spent three days together, discussing our research and the future of science in Africa. The discussions with more experienced and accomplished scientists were very useful for me.” 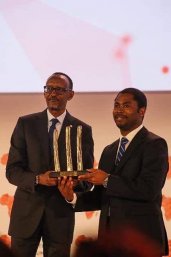 Apart from that, Ngene will be taken up into a group of African scientists that can be consulted by the African governments and institutions on matters regarding science and technology. “This is a tremendous honour”, he says. “A NEF Fellowship is for life. In the future, I may be able to help shape the policy on science of African governments. African universities are already good at theoretical sciences like mathematics and theoretical physics. However, they will have to grow in the more technical sciences. This current lag is caused by the lack of infrastructure and funding for fundamental research.”

Utrecht University chemist Ngene is also taken up into a new programme of the World Bank, called ‘Partnership for Skills in Applied Sciences, Engineering and Technology’ (PASET). It aims to strengthen the scientific and technological capability of Africa by building partnerships between some African and world leading universities.

The Nigerian Peter Ngene (1978) studied Chemical Engineering at the Federal University of Technology Owerri in Nigeria. He came to Utrecht in 2007 to do his PhD research on storing renewable energy, under the supervision of Utrecht University chemistry professors Krijn de Jong and Petra de Jongh. After he obtained his PhD in 2012, he worked at Delft University of Technology as a postdoc for three years. Since 2015, Ngene is an assistant professor in the Inorganic Chemistry and Catalysis group, Debye Institute for Nanomaterials Science at Utrecht University.

The Next Einstein Forum (NEF) is an initiative of the African Institute for Mathematical Sciences (AIMS) and the Robert Bosch Stiftung GmbH (Germany). It is a platform that brings together leading thinkers in science, policy, industry and civil society in Africa to leverage science and to solve global challenges.