New disease insights are bubbling up

Strange bubbles in the intestine of a tiny worm may lead to greater understanding of diseases in humans, such as skin disorders, cataracts and ALS. Researchers discovered the bubbles in the worm species C. elegans. 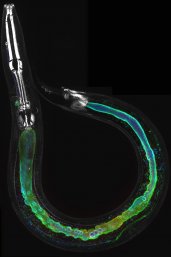 Bubbles in C. elegans intestine may lead to new insights into human diseases.

Investigating the bubbling process, the researchers discovered a new protein that regulates the shape of the intestine. A similar protein exists in humans, the research team discovered. The question is now whether this protein, dubbed bublin by the researchers, also plays a similar role our bodies.

Follow-up research should reveal this, says Prof. Mike Boxem, who led the study. If bublin turns out to have a comparable function, then it could be a starting point for more insights into various diseases in which cellular rigidity is affected.