The Royal Netherlands Academy of Arts and Sciences (KNAW) has announced the names of four young researchers who will receive the Heineken Young Scientists Award in 2020. The Utrecht based physicist/chemist Freddy Rabouw wins the prize in the category Natural Sciences.

The Heineken Young Scientists Awards are important incentive prizes for young researchers whose outstanding achievements mean that they set an example for other young scientists. Each prize comprises a monetary award of EUR 10,000 and an artwork. 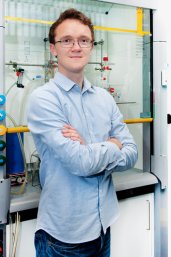 Freddy Rabouw (1988) is receiving the Heineken Young Scientists Award 2020 in the Natural Sciences for his research on new materials to generate light, for example for solar cells or display screens. The materials he studies are mainly nanocrystals of only a few thousand atoms in size.

What he is attempting to understand is how such a nanocrystal can efficiently convert one colour of light into another. This is fundamental research, but with various applications. For example, semiconductor nanocrystals, also known as “quantum dots”, are used in the latest generation of televisions.

I might have a walk-in fridge built into my house, inspired by the famous Heineken advertising

“I enjoy my research work on nanomaterials as much as I enjoy teaching in the departments of Chemistry and Physics. I see the award as an important encouragement that this work is also appreciated”, Freddy Rabouw responds. “I am very grateful that my fellow researchers have taken the effort to nominate me in secret and I am honoured that the jury has selected me. With money that comes with the prize, I might have a walk-in fridge built into my house, inspired by the famous Heineken advertising.”