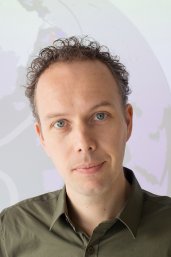 The time I spend at sea is for me by far the best part of being an oceanographer. I started my undergraduate degree in physics, back in 1999, because I wanted to become an operational meteorologist. It was only after I got the opportunity to join a five-week sea-going research expedition to the subtropical Atlantic Ocean, that I decided to do my thesis project in physical oceanography. I was mesmerized by the enigmatic vastness, quietness and sheer beauty of the ocean.

I still vividly remember the day, about four weeks into the expedition, that the captain stopped the ship for a ‘man-overboard-practice’. We were 800 km from nearest land, hadn’t seen any other ship for weeks, and now the captain asked us whether we wanted to go swimming. As I stood on the taffrail, I thought about the 4000 m of deep blue ocean beneath me, about how small I was in this enormous ocean, and how little we know of what was going on down there. On that moment, I was forever sold for oceanography.

One of the unique features of IMAU is how we connect theoretical research of the climate system to field observations. We have a long tradition in testing and validating our theories and numerical models on Alpine glaciers and the Greenland and Antarctic ice sheets, on air samples taken from balloons and aircraft, and of course at the unique atmospheric measurement station at Cabauw.

And we go to sea. For that, we partner with our close colleagues at the Royal Netherlands Institute for Sea Research (NIOZ). Over the years, dozens of our students and staff have joined expeditions on the RV Pelagia, the 66m long national research flagship. She has taken Dutch oceanographers, including from IMAU, on a ‘round of Africa’ and has weathered many storms in the frigid North Atlantic. In the recent round of UU-NIOZ PhD funding, scientists from IMAU have been awarded two projects, both with a sea-going component.

And now, NIOZ and NWO have started the procedure for building a successor to Pelagia. Named after early-twentieth-century phycologist Anna Weber-van Bosse, the new flagship will be bigger than the Pelagia. This means she can support longer voyages under more challenging conditions. But at least as important for IMAU is that the new ship will have almost twice as many berths. This means that more scientists can join on the expeditions, and hopefully that there will also be more opportunities for our students to partake.

Because I wish that more of our MSc and PhD students interested in physical oceanography get the opportunity to go to sea and experience the beauty of the open ocean for themselves. So that they learn how challenging it can be to take observations of the ocean, interact with the marine ecologists, geologists and atmospheric scientists that are also on-board, and see how theory and practice can go hand in hand at sea.