“The scope of the investigation was immense. We researched a practice that dates back to the 1950s - and still exists today”, says Yannick Balk. As project leader from Utrecht University, the historian was involved in the realization of the report on possible abuses in intercountry / foreign adoptions in the past, and the role of the Dutch government and adoption mediators in this.

The report of the Joustra Committee (consisting of Tjibbe Joustra, Beatrice de Graaf and Bert-Jan Houtzagers) was presented on February 8 to Sander Dekker, Minister for Legal Protection.

Under the supervision of the committee, a team carried out historical research in the archives of several Dutch authorities. Government archives (such as the ministries of Justice, Foreign Affairs and embassies, the Public Prosecution Service and the IND) as well as private archives of individuals involved, and adoption agencies were examined. "Thousands of documents have been reviewed. Hundreds of newspaper reports, parliamentary questions, parliamentary debates and political documents have been analysed by the team" (consisting of principal investigator Prof. Georg Frerks, project leader Yannick Balk, two full-time historians and three student assistants). “All historians are (former) students of the master International Relations in Historical Perspective and / or the research master History at Utrecht University. Without the hard work of the entire team, the final report of the committee could never have been produced in this way”, Yannick says.

It was sometimes difficult to navigate through the immense amount of research material (both self-found and material provided by those involved), especially in the (government) archives: viewing thousands of documents requires perseverance, to put it mildly.

Conducting historical research is complex. Not only do you dive into the archives and organize and analyse documents, but with an assignment like this, mapping ‘wrongdoing’, you must first define what ‘wrongdoing’ is. “Everyone has a certain feeling or image about the term but how do you ensure that such a ‘vague’ concept can be made tangible, define it in such a way that you can also adequately investigate it? Is a wrongdoing only a wrongdoing if it is not allowed by law? Or do you also take into account the (ethical) context of the time?  And if so, how do you ensure that you do not project your contemporary view or opinion onto the past? That requires a high degree of historical empathy, and that's where the role of the historian comes in."

The adoption debate is highly polarized, with strong supporters and opponents. Navigating within this is a necessary and regularly exciting challenge.

How do you define wrongdoing?

“In the end, and thanks in part to the proportion of historians in the study, we examined wrongdoing as both acting in violation of laws and regulations, and acting ethically irresponsible. That produced as balanced and historically-scientific an investigation and final report as possible.”

For Yannick it was sometimes poignant to read about what happened to (adopted) children in countries of origin or elsewhere, for example as a result of indescribable poverty, hunger and general malaise. “As a researcher you obviously have to build up a certain professional distance to this, even if that is not always easy. The adoption debate is highly polarized, with strong supporters and opponents. Navigating within this is a necessary and regularly exciting challenge, that also requires a professional approach and independent distance.”

The added value of historians in such committees is enormous. They know how to get to the bottom of things like no other with thorough archival research. According to chairman Tjibbe Joustra, previous government investigations have never before been so thorough with research in archives. 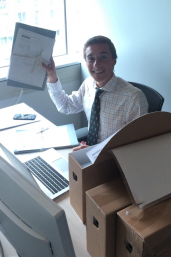 According to Yannick, historians are indispensable in such large-scale (government) investigations. “We are trained to process gigantic amounts of information in the most efficient way possible. This is especially true when it comes to researching the archives - a real craft! For example, before drawing up the adoption report, we examined thousands of documents, from letters, reports and memoranda, to handwritten notes. Historians have an eye for a longer-term perspective and for norms, values ​​- in short: contexts - of the past. In our research, for example, we did not look at a concept such as ‘abuses’ from today's perspective, but rather looked at it in the gaze, words and actions of people in the past: in other words, how people viewed it at the time. This (working) method of ‘historicizing’ is indispensable for such investigations. In my opinion, this should definitely not be missing from, for example, the forthcoming parliamentary inquiry into gas extraction in Groningen, or comparable, large-scale (government) investigations.”

Yannick is a strong proponent of applied history, historical research with the aim of discovering deeper, longer-term tendencies that can help us solve contemporary problems. “We historians are not only concerned with a dusty, obscure, distant past in the dark recesses of an archive; we can make an indispensable contribution to finding answers to widely shared / perceived social issues and problems. This report and the collaboration with researchers from Utrecht University is a perfect example of this.”