Minnaert. It’s hard to miss the bright red building at Utrecht Science Park that prominently carries his name. Or does his name carry the building? Who was this brilliant solar physicist, who passed away 50 years ago this month? An ode to a great populariser of science, who earned an international reputation with his research on the sun, the symbol of our university.

Marcel Minnaert (12 February 1893 – 26 October 1970) was a Flemish biologist who spent most of his career as a physicist and astronomer in Utrecht. He is best known as a solar physicist, thanks to his ground-breaking spectroscopic research into the sun. His career in Utrecht began after fleeing Belgium in the aftermath of World War I. Here he earned a second PhD; this time in Physics under the supervision of Professor Ornstein, another famous name at Utrecht Science Park. He then became a Professor of Astronomy at Utrecht University, and he was appointed Director of Sonnenborgh Observatory in 1937.

A condition of his appointment was that Minnaert would be allowed to take the three-story solar spectrograph with him from the physics laboratory to Sonnenborgh. Minnaert used the measurement installation to observe the sun; a unique field of research at the time. His pioneering discoveries have since become general knowledge: he determined of which elements the sun is composed and designed the measurement methods astronomers still use today.

When I first heard him speak, I was so impressed that I decided to study astronomy right there and then 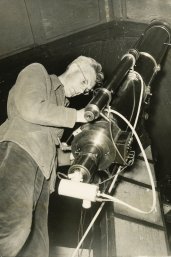 “Minnaert was an exceptionally genial guy, a very warm person. He could give amazing lectures. When I first heard him speak, I was so impressed that I decided to study astronomy right there and then”, recalls the now 99-year-old Kees de Jager, who would later follow in Minnaert’s footsteps and would set up the field of space research in the Netherlands.

During World War II, Minnaert was imprisoned together with several other leading Dutch figures and ended up in Camp Sint-Michielsgestel, together with the later Nobel Prize winner Niko Tinbergen, among others.  He continued to give lectures in the camp. “During the war, I hid at Sonnenborgh, where I secretly took illegal exams”, De Jager explained over the telephone. “I also had exams from Minnaert after he returned from the internment camp. After the war, I was able to show all of the exam letters to the university and earn my degree, and I immediately started working as one of Minnaert’s assistants. It was an unpaid position, however, because as Minnaert always said: ‘Mister De Jager, money isn’t everything in life!’ I later became a full Professor myself, but I always continued to call him Professor.”

Just before the war, Minnaert published the now world-famous Utrecht Atlas, a detailed graphic illustration of the solar spectrum that earned him international renown and that became a major influence on the field of Astronomy. “It’s an atlas of the spectrum of the sun, organised according to the wavelengths of solar radiation”, De Jager explains. “You can use that to derive which elements the sun contains, such as hydrogen and helium - Greek for ‘Sun Element’. We didn’t know that until we started studying the sun.”

Accurately measuring all of those spectral lines by hand eventually resulted in Minnaert’s most-cited work, The Solar Spectrum, in 1966. “The entire institute helped measure the more than 30,000 Fraunhofer lines”, says Rob Rutten, who was a student at the time and remembers Minnaert as a decent man and a strict teacher.

“Those spectral lines are still the tools of the astronomer”, says Rutten, who later became a solar physicist at Utrecht University himself, and who still conducts research in the field. “Today everything is digital and automated, but I still look up information in The Solar Spectrum today.” Minnaert’s trademark is now common practice for studying the composition of stars and planets, as well as the sun. “Minnaert’s main legacy is setting up quantitative spectrometry as an instrument for measuring the atmosphere of the sun and the stars.”

But that is not all Minnaert is known for. He also caused a stir with his three-volume series De natuurkunde van ’t vrije veld (Light and Color in the Outdoors). “It’s a wonderful collection of Minnaert’s observations outdoors or from the train, which can be explained with a bit of physics”, says Peter van Capel, lecturer and lab supervisor at the Department of Physics and Astronomy. For example, Minnaert explains the physics behind phenomena such as why telegraph wires ‘sing’, the Man in the Moon, the slapping of a rope against a flagpole, how you can hold a blade of grass between your thumbs to make a whistle, and how vertical objects such as houses and trees seem to bend forwards when a train decelerates. In so doing, he practised what we now call ‘popularisation of science’. It was just a hobby project, but it encapsulated Minnaert as a person who not only observes, but also explains what he sees.

Minnaert was known as a person who not only observes, but also explains what he sees. 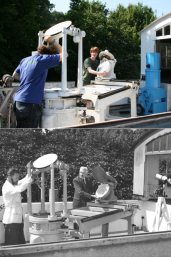 The solar spectograph now and then

“Those direct observations are still important in the study programme. We still use the solar installation at Sonnenborgh for lab seminar experiments”, Van Capel explains. “And it was Minnaert who introduced experimental education at secondary schools. We still enjoy the fruits of that today. Nobody today questions the importance of a practical component in physics education. He also laid the foundations for the university-level Physics teaching programme, which not only consisted of theoretical physics, but also experimentation and innovative teaching methods.”

In the spirit of Minnaert, this month marks the start of the Weather Challenge, in which people learn how to observe physics phenomena in the air. “Observation was something Minnaert excelled at, both in his scientific work and in Light and Colour in the Outdoors”, says meteorologist and climate researcher Peter Kuipers Munneke, who read the classic as a precocious 10-year-old, and who came up with the Weather Challenge. “Minnaert had such a sharp eye for the world around him that he saw physics in everything – from the angle of a flight of geese to how snow falls – and he filled three whole books with his observations.” For the Weather Challenge, Kuipers Munneke selected 20 phenomena that are easily observable in autumn, such as fog shadow and ‘Jacob’s Ladder‘ (Crepuscular Rays). He has recorded videos explaining the phenomena, and asks people to send their photos. “It’s a bit like what Minnaert would do if he were alive today. From thick books to vlogs, from sitting among the reeds with a notebook to going outside with your smartphone.”

Even after Minnaert died, he could continue to inspire students; he donated his body to science

It is remarkable that Minnaert embraced the importance of experimental observation even after his death. “He donated his body to science”, explains De Jager. “So there wasn’t a funeral when he died, which was a bit unusual. But it was typical of Minnaert. Even after he died, he could continue to inspire students.”

There are still references to Minnaert and his solar research scattered about Utrecht University. There is the 1.5-meter bronze sun in front of University Hall at the Domplein, which Rob Rutten commissioned to mark 350 years of astronomy in Utrecht. The sun was intended to mark the start of the ‘Utrecht Solar System’; a model of the planets of the solar system at a scale of 1-to-1,000,000,000. The Earth would be located at the Vismarkt, and Pluto would be in Rijnauwen. Unfortunately, the Utrecht Solar System was never completed. In 2018, cultural entrepreneur Louk Röell conceived a similar plan and he realized the Utrecht solar system, with Jupiter on the Abstederbrug, Venus on Lange Nieuwstraat and Uranus under the viaduct at the Kromme Rijn. By then, the Utrecht Astronomical Institute was dissolved, bringing an end to Minnaert’s world-famous solar research for which the Sol Iustitiae was such an appropriate symbol.

At Utrecht Science Park, the eye-catching Minnaert building at the north-west corner of the campus still serves as a daily reminder of Utrecht’s influential scientist. The building not only carries his name; the name Minnaert also carries the building. The terracotta-coloured building features ridges on the facade that suggest the curves of wind-blown dune landscape, and the train seats in the main hall are a playful reminder of the train where Minnaert conducted his observations of the everyday world. The building’s location, with the long facade and entrance pointing to the south and the absence of other buildings nearby, place ‘the Minnaert’ directly in the unobstructed path of the sun, just as the sun was the central focus of Minnaert’s life’s work.

Video: Minnaert on the sun

Prof. Marcel Minnaert explains his research into the sun and the spectrum he carried out at Sonnenborgh.