On 19 November Utrecht Forum for Memory Studies organizes a seminar on the productive frictions of holocaust remembrance from Australia to Shanghai with Rosanne Kennedy (Australian National University).

In Australia, as elsewhere, the issue of public remembrance – of what events should be commemorated and how - has been contentious. This seminar, based on a forthcoming article by Sulamith Graefenstein and Rosanne Kennedy, explores the transnational, national and local dynamics shaping public remembrance in Australia through two case studies: Holocaust remembrance and colonial violence.

Firstly, Graefenstein and Kennedy identify tensions between and within practices of Holocaust remembrance at the national and local levels. While Australia is petitioning to join the International Holocaust Remembrance Alliance (IHRA), Holocaust remembrance in Australia has traditionally been fostered by survivor communities. Recently, in a move spearheaded by descendants of survivors, the Sydney Jewish Museum (SJM) has expanded multidirectionally, using Holocaust remembrance as a platform to highlight past and continuing human rights violations in Australia, including against Indigenous people.

To explore more fully the personal and affective work of remembering violations against Indigenous people, a second case will be discussed: recent artworks by Judy Watson. In installations such as “Mapping Frontier Violence” and “Experimental Beds” she not only promotes remembrance of colonial violence and its legacies in Australia; she also creates a multidirectional dynamic, linking her intimate family history with that of Thomas Jefferson’s slave, Sally Hemings. Watson’s work is significant because it introduces intimate and racialized sexual appropriation as a basis for transnational, multidirectional colonial memory, thus providing an alternative to the dominant Holocaust paradigm. 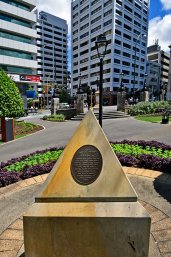 Holocaust Memorial in Stirling Gardens in the capital of Western Australia © iStockphoto.com/fotofritz16

In the final section of the seminar, Kennedy will reflect further on the ‘locations’ of memory, drawing on her recent visit to the Shanghai Jewish Refugees Museum and a recent Australian novel, Jade Lily, which takes a multidirectional approach to Holocaust refugee memory in Shanghai. Significant in these acts of remembrance located in part in Shanghai is the emergence of a much-less explored narrative of Holocaust memory – the story of hospitality in extreme conditions – which is a compelling memory in our era of refugee mobility today.